Snooki Is Not Going To Spoil Lorenzo With Too Many Gifts 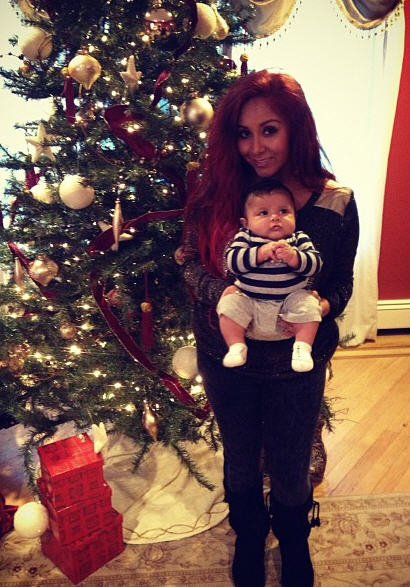 Nicole “Snooki” Polizzi is excited to spend the holidays with her fiancé Jionni LaValle and their son Lorenzo.

“I just want to be with my baby,” the new mom told of what she wanted most for the holiday.

Although, when asked if she were going to spoil her 3-month-old son the reality star revealed:

“Not really,” Snooki told at at the Jersey Shore series finale press conference.

“I got advice from other moms—don’t go too crazy with the gifts, because he really doesn’t know what’s going on,” the 25-year-old mom said. “He’s only three months old. I got him a few toys, but I did get him a lot of Christmas outfits.”

Baby Lorenzo doesn’t have to worry too much about not receiving presents because his godmother JWoww has bought him a lot of presents.

“I got a bunch of things for him,” JWoww said, adding, “but it’s still not fun yet because I want to get him like motor scooters and little electric cars. I want him to terrorize her house.”

You might also likeMore from author
Nicole "Snooki" Polizzi

Snooki Offers Up Baby Advice to Kate Middleton – What Would Your Advice Be?