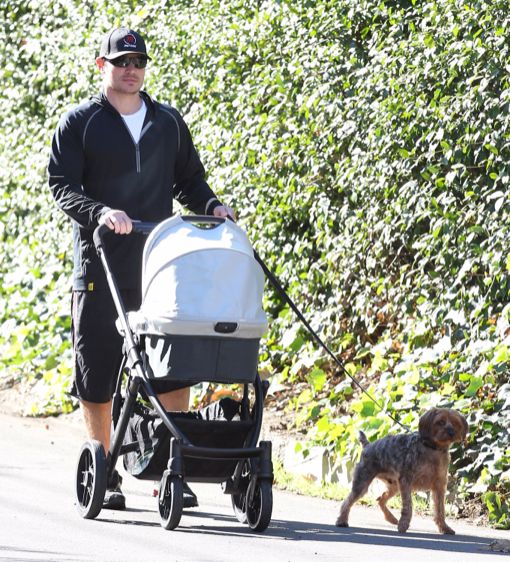 Nick Lachey took his baby son Camden and their dog for a stroll in Sherman Oaks, Ca on Monday (Dec. 10).

The 98 Degrees singer was dressed casually while pushing Camden in a stroller. The 3-month-old was not pictured because he was covered by a sun shade.

It appears that Lachey is not only a devoted father, but a devoted fan to his favourite team, the NFL Cincinnati Bengals.  Last week, he was kicked out of a football game at the California’s Qualcomm Stadium after allegedly trash-talking the San Diego Chargers.

“Just got kicked out of the chargers stadium and couldn’t be prouder!” he wrote on his Twitter page. “Go Cincy Bengals… Bengals win again. i’d talk trash to everyone in SD, but what’s the point? you already had me kicked out of the stadium and you still lost… Majority of charger fans were awesome yesterday, thanks for the hospitality! Sadly, there is always one guy that ruins it for everyone.”

A fan later claimed that the trash-talking went further than a little banter between opposing fans. He accuses the singer of calling his wife a “f**king bitch” before shoving him to the ground and grabbing his neck.

Sara Rue Takes a Pregnant Walk With Her Little Dog