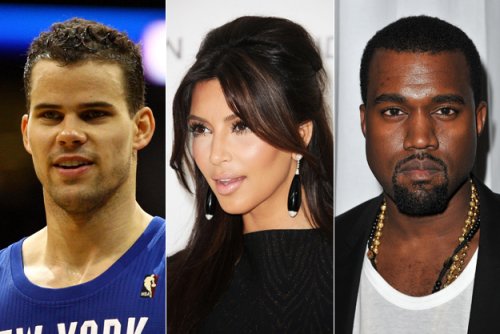 When a husband learns his wife is pregnant, it’s usually straight from his spouse, but Kris Humphries woke up this morning to see it blaring across every news outlet – congratulations to Kim Kardashian on her pregnancy. Of course, it’s not a child she’s expecting with her husband – it’s with her lover Kanye West. Kim is at the end of her first trimester – so that’s three months pregnant and she’s been dating rapper Kanye for about 10 months. I wonder how much of that time they’ve been trying to get her preggers?

After Kanye broke the news in his usualy low-key style – from the stage during a concert – Twitter blew up with congrats for Kim and her non-husband Kanye on their adulterous offspring. Yeah! Kim published a blog on her website today that read: “It’s true!! Kanye and I are expecting a baby. We feel so blessed and lucky and wish that in addition to both of our families, his mom and my dad could be here to celebrate this special time with us. Looking forward to great new beginnings in 2013 and to starting a family.”

Really Kim? You wish your Dad was here to see you married to one man and knocked up by another? Gee, I wonder how proud he would be. Kanye’s mom probably wouldn’t be surprised by any antics her son is up to, but the elder Kardashian might not have been so pleased at how his daughter is conducting herself.

Before Kim and Kanye get started with their “great new beginnings” shouldn’t they wrap up that loose end known as her husband? All Kris wanted was an annulment. He didn’t want a divorce, because he says his spirituality precludes him agreeing to that. What does it matter to Kim if it’s an annulment versus a divorce? She’s already got one divorce under her now expanding belt line, so I can see how one more divorce wouldn’t matter to her. But if it matters to Kris, why won’t she just give him the annulment?

Calling it “fraud” is not so big a deal either. If you remember, Kenny Chesney and Renee Zellweger called it quits after just four months and she filed an annulment that said fraud and he signed off just to have done. He admitted on Oprah that he wasn’t ready for marriage and so he okayed the annulment. That’s pretty much the same thing that happened to Kim. Kris was obviously in love with her and she was in love with the idea of a big fancy wedding – and maybe in love with the idea of being in love. But she clearly wasn’t in love with Kris or ready to settle down with him. In my book, that’s fraud. It’s not murder or anything, but it is misleading. So she should say okay to the annulment and move on.

I’m sure Kanye would like to marry his baby mama ASAP and the only one standing in the way of that happening is Kim not Kris. I see Kris as blameless in this and hate that he had to wake up to this news. If I was him, rather than seeing this as a sign to give up and grant the divorce he should dig in his heels. She’s got to be more desperate than he is at this point to put an end to their union, so he should wait her out.

Disclaimer: The views in the post aren’t necessarily the views of Celeb Baby Laundry. We have multiple writes that are free to be creative and express their own opinions. Not everything needs to be vanilla!