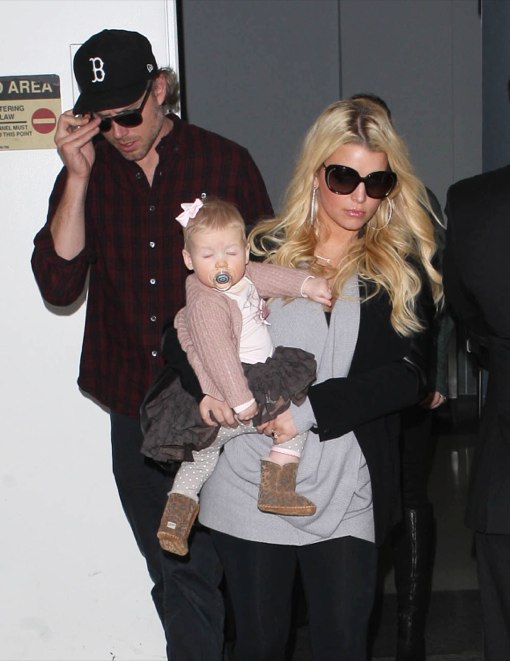 Well, you have to hand it to Jessica Simpson. She got down to her target post pregnancy dream weight, landed on every tabloid cover imaginable and milked her fifteen minutes of skinniness for all it was worth before announcing her second pregnancy!  She had talked pretty openly with her struggle to lose the last 20 pounds that she was carrying around for months after her daughter, Maxwell, was born. It made her an outcast in Hollywood where women have babies and appear on the red carpet two weeks later in an itty bitty dress, but middle America totally related to her struggle.

She initially credited a crash diet of smoothies with her rapid weight lost but now it seems that it was actually severe morning sickness that caused Jess to knock off the remaining pregnancy weight. A source close to Jess recently told the National Enquirer,

“Jessica really didn’t start showing a significant amount of weight loss until the last couple of months, after she became pregnant with her second child. She now believes that she conceived at the end of September!  Jessica was trying so hard to lose her baby weight that she never dreamed she could be pregnant again,” added a family friend. “But when her morning sickness kicked in, the pounds just melted away! She’s dropped more than 20 extra pounds and reached her goal weight!

That makes a lot more sense. Nothing helps a crash diet quite like the inability to keep food down!  Do you think that Jessica realized pretty quickly that she was pregnant again?  It’ll be interesting to see how she handles bouncing back from two babies in as many years. It’s not an easy thing for any woman to do, I can tell you that from experience!

Will Jess do things differently with this pregnancy, maybe eat a bit healthier and exercise more? Tell us your thoughts in the comments below!

Reese Witherspoon Opens Up About Her First Time Becoming A Mother