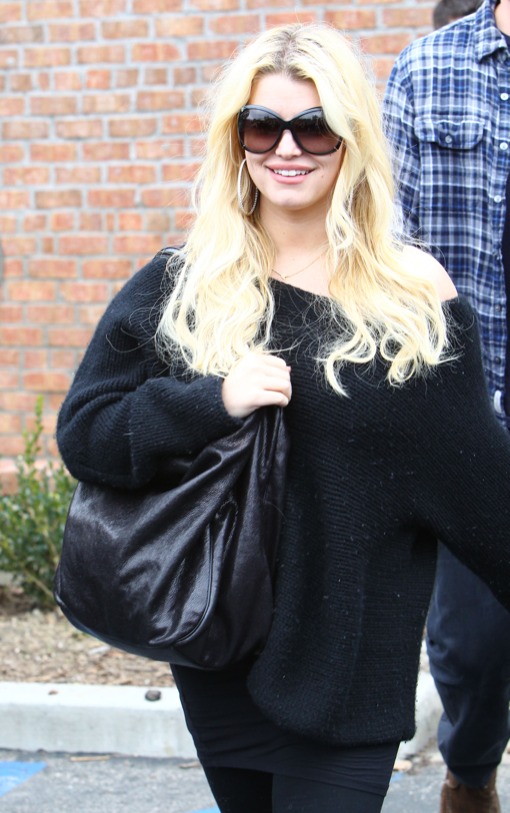 The newly pregnant Weight Watchers spokeswoman strategically wore a baggy black sweater with a long tank and tights to hide her growing baby bump. She also resorted to resting her black purse against the side of her stomach all in hopes of keeping the news on the down low.

Even though Simpson has yet to confirm the news it appears as though she is having no problem induldging in her cravings. On December 2, Simpson was spotted pigging out at her best friend CaCee Cobb‘s birthday lunch.

“Jessica ordered a grilled cheese sandwich with onion rings,” a fellow diner at the Polo Lounge in Beverly Hills revealed to Us Weekly.

The mom to 7-month-old Maxwell also stayed away from alcohol.

“Guess what?” she told her server, with a smile. “I’m drinking ginger ale!”

Executives at Weight Watchers who reportedly paid Simpson $4 million to lose the baby weight after giving birth to Maxwell are said to be enraged at the singer.

“They’re furious at Jessica,” a source told Us Weekly. “She was already on thin ice with them since she didn’t lose enough for a the first ad, when they had to shoot from the waist up.”

The company is said to have another advertisement which was filmed after Simpson lost the weight, but they have reportedly decided to not air it if she is indeed pregnant.

Eating out with Kids