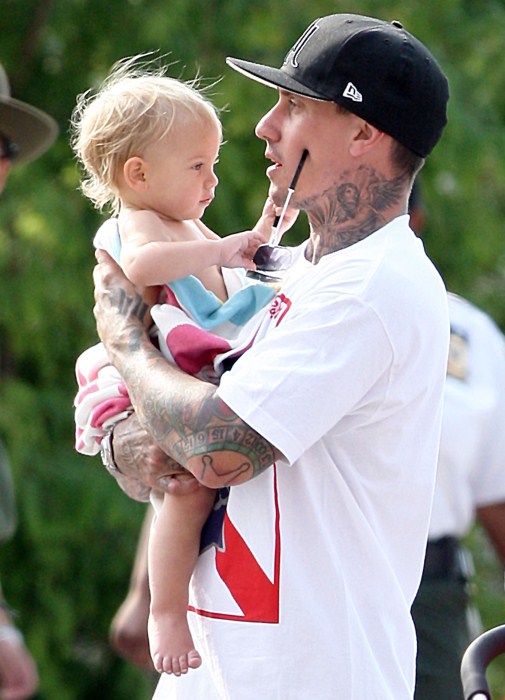 Pink and husband Carey Hart were spotted out with their one-year-old daughter Willow in New York City on Monday. Hart affectionately carried Willow who was having fun stealing his sunglasses. Willow enjoyed some fun in the sun playing in some water at a park.

The family spent last week in Europe where Pink was promoting her latest album, The Truth About Love.

When asked if she’ll tolerate Willow taking drugs when she is older  in an interview for Britain’s The New Review, Pink told:

“No. But you know what I’m not gonna do? I’m not gonna teach my child to be a liar by telling her no, she can’t do or be who she wants to be. I’m gonna try figure out a way with (husband) Carey (Hart) to safely allow her to navigate the world. No, she (is) never gonna f– touch heroin. I’m gonna make sure of it. And if she wants to f– hate me for it, that’s fine.”

The singer who has been open about her drug and alcohol abuse adds that she doesn’t want her daughter to go down the same path she did as a teenager.

“She won’t have my teenage life because I’ve already been there. I’m prepared to be a lot stronger than my mom was. That’s all. I’m never gonna know everything, but I know a lot.”