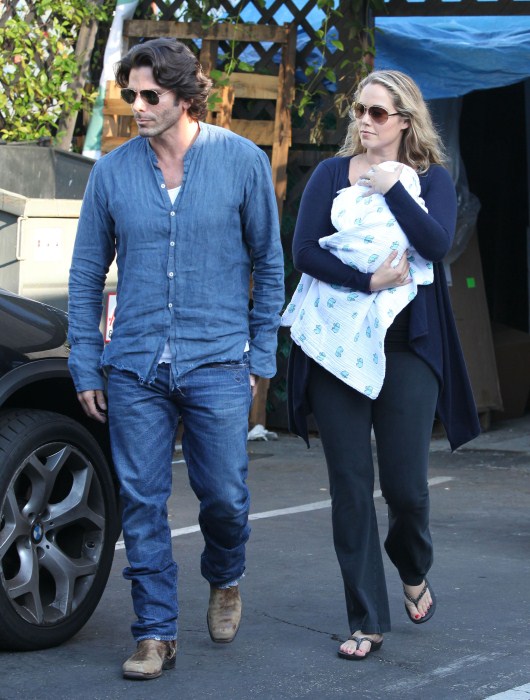 Elizabeth Berkley and her husband Greg Lauren took their eight-week-old son Sky out in public for the first time in Beverly Hills, Ca on Monday. The Showgirls star protectively carried the newborn in an Aden + Anais swaddle blanket as she made her way out of the trendy baby store Bel Bambini. Lauren was later seen pushing the baby in a stroller while Berkley walked by his side.

Two weeks ago at the opening of Dylan’s Candy Bar’s West Hollywood, the new mom told how she’s settling in to her life as a mother so far.

“I’m missing [Sky] right now, I’m going through separation anxiety,” Berkley told Us Weekly. In general, though, motherhood has “been amazing and magical. I have a lot of friends who have little ones and I love their kids, but until you have your own, it’s like you can’t quite grasp the intensity of the love, the depth of it . . . it’s so special.”

Berkley added that everything else has taken a backseat to her bundle of joy.

“I’m really savoring this time,” she explained. “I have a lot of work I will be doing, but I’m just enjoying the focus of where I should be. You can’t get this moment back, you know what I mean? That’s why I’m savoring it.”