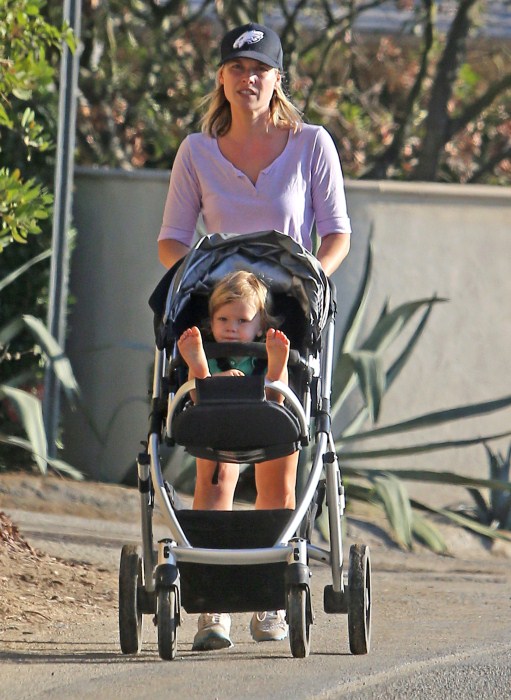 Ali Larter was spotted taking a hike with her one-year-old son Theodore at Runyon Canyon in Hollywood, California on Wednesday. The actress looked sporty wearing a Philadelphia Eagles baseball hat with white stretch shorts and a pale top. The little tot looked comfortable in his stroller as he kicked up his feet and enjoyed the ride.

In August, Larter told OK! Magazine that she includes Theodore in her four-day-a-week, 30-60-minute workout.

“As a new mom, time is of the essence,” the actres tells. “I’m busier than ever, and exercise has gone down to the lowest priority. But I take the baby for long strolls. I go out for a jog, hit a yoga class when I can. I try, when I do have a free moment, to be active, instead of just — sleeping!  [laughs]”

“I’m really lucky that I live in a place where I can leave my door and go running up in the Hills,” the actress continues.

“That’s something that I love to do, to get the fresh air and to be in nature. If I don’t have the time to do that, I’ll go in, I’ll do Pilates, I’ll grab a yoga class. It’s harder for me to get away – and I think that’s the case with a lot of moms. If you can grab half an hour or an hour, it’s easier than having to leave and drive somewhere. You can do stuff in your house. When there’s a moment, you should try to do it,” she adds.

How do you maintain a good level of fitness while being a mother?