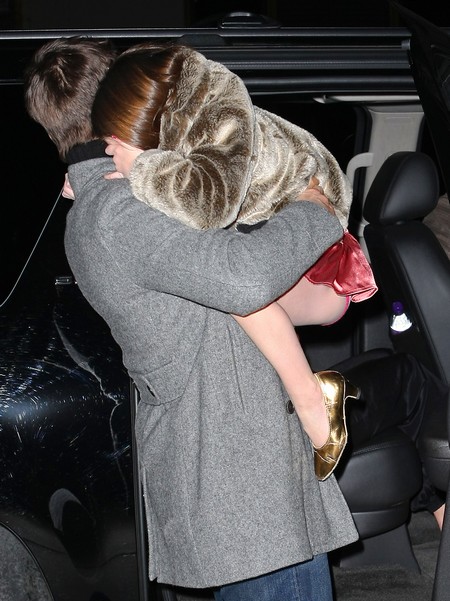 Are you prepared for a really sad Tom Cruise story? Get the Kleenex and the chocolate.

Tom Cruise received a little card from Suri Cruise for his birthday and completely broke down into tears. There was a hand drawn picture in the card, of the entire family holding hands.

An insider tells NOW magazine, “Poor Suri wanted to do something special for her dad’s 50th birthday on 3 July. So she sent Tom a drawing of her step-siblings Isabella and Connor, herself and Mommy Katie Holmes and Daddy all holding hands. He was really moved.”

Okay, we need a moment here to go wash our faces. Our tears are so dirty right now.

Tom Cruise was reunited with Suri the past weekend and he took her on a helicopter ride over the city. Tom and Katie agreed on divorce settlements and custody arrangements within eleven days. The world expected the custody hearing to explode out of every orifice of entertainment writing, but it did not end with a bang, but with a whimper. Katie and Tom have a long way to go to recuperate from the trauma of this divorce, especially when rumours were rampant about Tom’s Scientology cronies and Katie Holmes’ fame whore breakdowns. Suri is the only real victim in this entire split.

It saddened us beyond belief when we read the source material which appeared in our emails. It is a heart breaking moment which cripples the ever controlling façade of celebrity and reminds us that they are also real human beings.

Let us know your thoughts in the comments below on this truly heart wrenching tale.

Ways To Save: Planning For Baby Number Two