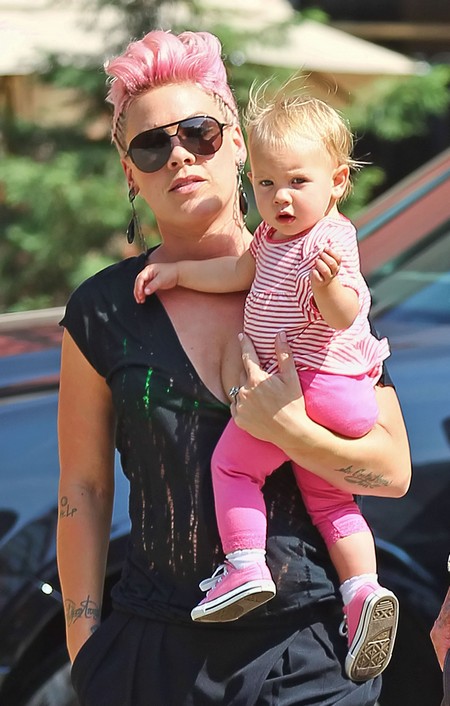 Pink’s one-year-old daughter Willow Sage Hart guest stars on two of Pink’s tracks from her new album “The Truth About Love”. The rebellious singer spoke to MTV News and said, “She plays bells on ‘How Come You’re Not Here,’ and she plays bass on a song called ‘Timebomb.’ She’s actually quite talented for a 13-month-old!”

Wow, Pink! It seems like you’re grooming little Willow into becoming a future pop star! Pink explained how Willow ended up playing certain music on the tracks, “There was a basket of sh*t, and she came over and pulled out the bells and started banging on them, and I was like, ‘Record it!’ And then she went up to the bass guitar on ‘Timebomb’ and started plucking away. She’s actually pretty good! She’s better on bass than I am.”

The powerful vocalist will be releasing her latest album on the 18th of September and we’re all excited to listen to little Willow jamming along to the tracks. Pink says she tried her best to cut down on the swear words in the songs, but this is Pink, right?

She continues, “Well, it’s kind of funny with ‘Blow Me’ (new single) because people are like, ‘Oh right, another “f*ck you” song from Pink. Awesome. I didn’t actually realize that’s my theme, but that’s been my life, so that’s what I write about. But there’s also humor; there’s a lot of humor and sarcasm always in my lyrics”

We love you for your music Pink and it’s only an added bonus that your kid is a little one year old guest star on your new album!

Ways To Save: Planning For Baby Number Two