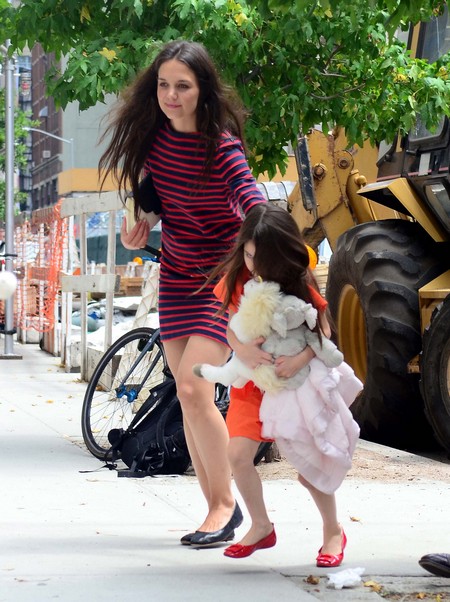 You want to hear something weird? Scientologists raise their children like little adults, not like the kids they’re supposed to be.

Suri Cruise has been raised for years under the discipline-free guidelines of Scientology. According to Us Weekly, print edition, July 30, 2012, “Tom would let Suri do whatever she wanted,” says a source close to Holmes. Suri had become very demanding and overtly bratty.

Tom bought Suri so many designer clothes that our jaws literally dropped. She received an $850 Salvatore Ferragamo tote and a $169 Eliane-et-Lena faux-fur coat. The source says, “Suri knows her fashion labels. She will lay out her clothes and say, ‘This is Dolce & Gabbana’ or ‘this is Stella McCartney for Gap’. She’s seriously like a little stylist.”

Due to Suri’s undisciplined upbringing, she is allowed to have ice cream for dinner and choose her own bedtime. If she wanted to visit the American Girl store or a candy shop, there were no altercations. “She’s been brought up to be in charge of everything, so she is used to getting her own way.”

Thank goodness Katie received custody of Suri, hey? She’s putting her foot down and is trying to undo the damage done by Scientology and Tom Cruise. “Katie is getting Suri to bed by about 8 P.M. on most nights — she’s trying to put her on a regular schedule. Tom just used to let her stay up all night watching Scientology kids’ videos!”

We’re glad Katie is taking a stand and not allowing Suri to be the man-child that she is. Good on you Katie for taking control!

What do you think about these outlandish methods, readers? Do you think it is a good idea if a child is raised without the boundaries set up by society?

Reese Witherspoon And Baby Bump Keep It Casual At LAX