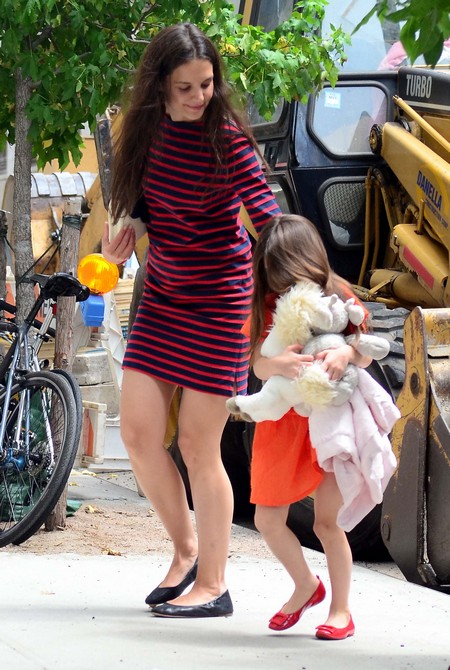 Katie Holmes’ life certainly changed when she married Tom Cruise, not only did she become involved in Scientology, but her life went from normal to VIP. There were no commercial flights for the soon to be ex-wife of Tom Cruise, it was private jets to everywhere they went around the world.

In their first step at getting back to normal, yesterday in NYC, Katie was protectively holding on to her daughter Suri as they traveled by a commercial flight; when mother and daughter were returning to NYC after a trip to Toledo, Ohio. Katie wants her daughter to be normal and experience things just like the rest of us do, not VIP and “all glitz” the way Tom does.

Meanwhile, Tom Cruise has been keeping himself busy, albeit without his family, he has headed to the UK. But, before doing so, Tom spent some quality time with Suri in the Hamptons last week and he also attended her gymnastics class. Although, the quality time turned into a private helicopter ride, and that’s just not normal.

Katie really hasn’t said that much about the divorce, but seeing her make a change from private travel to commercial certainly says that she is eager to make changes in her life that will affect both her and her daughter positively.

Suri is also known for her expensive children’s clothing, I wonder if Katie will now have Suri also dress in more conservative clothing? Is this the end of Suri’s high heels and lipstick wearing days, at least until she grows up?

Do you think that Suri can actually have a chance at a normal life with two parents that are movie stars? I think so, as long as Katie is in charge, Tom lost his chance at normal about three families ago.