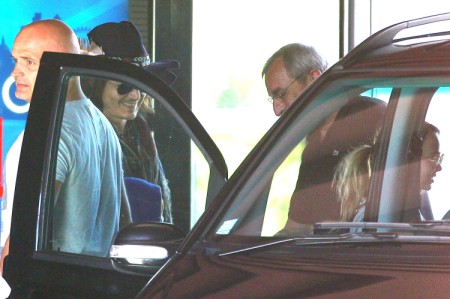 Pirates of the Caribbean star Johnny Depp arrived at the Nice Airport with his daughter Lily-Rose Depp and son Jack Depp yesterday to start their summer vacation in the French Riviera. Johnny’s been under a lot of media scrutiny ever since he and long-time partner Vanessa Paradis announced their split last month. It’s rumored that Johnny is dating his Rum Diary co-star, Amanda Heard, but she was not spotted in the pictures. This must just be purely a family affair.

Johnny has stayed busy during the split. He’s still filming The Lone Ranger with Armie Hammer and has recently agreed to to star in Wes Anderson’s next project, The Grand Budapest Hotel. I think that’s a perfect match. Can’t wait to see that one! Do you think Johnny’s quirk is just right for Anderson?