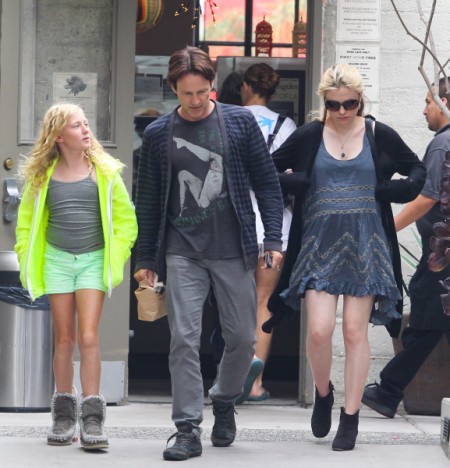 Anna Paquin tried to keep her baby bump under wraps as she went out to lunch with husband Stephen Moyer and her stepdaughter, Lilac Moyer yesterday in Venice. The actress is expecting twins this fall. Have you been watching True Blood? Things are heating up and Stephen is in the hot seat for a potential love scene with his vampire co-star Alex Skarsgård. He told The Advocate, “I’ve been asking myself that question for a long time. Alex and I would absolutely embrace that. Last year, when Sookie had her fantasy about the two of them with her, we even suggested it. Of course, Bill and Eric together isn’t necessarily Sookie’s fantasy.”

I’m sure Anna’s fantasy is to get those twins delivered! She looks adorable but slightly uncomfortable. Could just be the photographers though. Would you like to see the two hottie vampires hook up? Too out there for the show or is any excuse to see Alex and Stephen with their shirts off worth it?