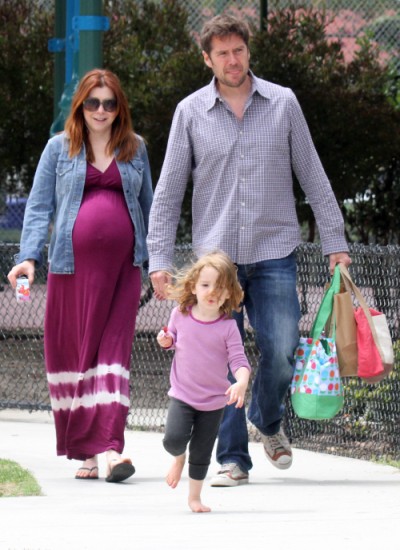 Funny girl, Alyson Hannigan, spent yesterday at a park in Santa Monica with her husband, Alexis Denisof, and three-year-old daughter, Satyana. The star is pregnant with her second child which is due in June.

Hannigan hasn’t revealed the sex of the baby but might have let it slip while on The Rachel Ray Show in April. She told Ray, “The other night, she — this, you know,” Hannigan recovered, when beginning an anecdote. She went on to describe how her baby frequently moves around, telling Ray, “I feel like a popcorn popper!”

I wonder what Satyana would make of having a baby sister. Hannigan told MSN in February, “Oh, she’s super, super excited! She is already a great big sister, and she’s very excited about the baby. She rubs lotion on my belly and talks to the baby, and it’s very sweet.”