Legal battles continue for Linda Evangelista and her son’s father 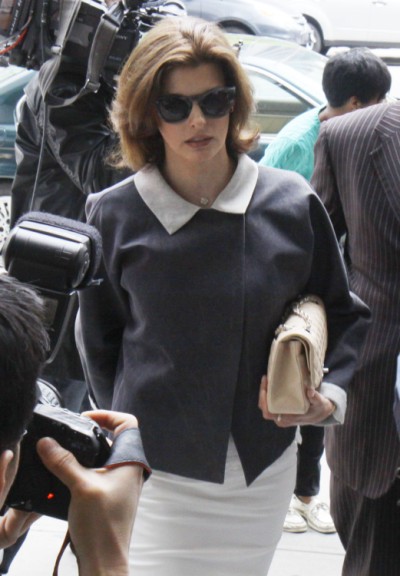 The four-day trial is underway to determine how much childcare support Linda Evangelista will be awarded from ex-boyfriend, and current husband to Salma Hayek, Francois-Henri Pinault. And many secrets are coming out of the closet.

On the stand, Evangelista divulged that Pinault asked her to have an abortion after finding out she was pregnant. Evangelista and Pinault had a four month relationship in 2006 but he confessed on the stand that he broked it off with the supermodel soon after learning she was pregnant. Pinault started dating Hayek soon after, and the couple have a four-year-old daughter, Valentina.

Evangelista decided to keep the baby but it took time for Pinault to claim Augustin as his son. Pinault admits he and Hayek were told their baby had Down’s syndrome for most of the beginning of her pregnancy and he asked Evangelista to delay the legal recognition process of Augustin until after the birth. Valentina does not have the disorder.

Evangelista is asking for $46,000 in child support a month for her five-year-old son. If awarded, the payout will shatter previous childcare records. Evangelista told the judge she spends $46,000 a month for their son’s around-the-clock nanny and armed drivers, and wants Pinault to cover the costs.

Pinault is heir to a family estate estimated at $11.5 billion. As chief executive of PPR, the conglomerate that owns Yves Saint Laurent, Gucci and Bottega Veneta, he earns $5 million a year. Yet he is still balking at Evangelista’s demands calling the high child support, “mom-support”.  “Most of the expenses do not relate to Augie but they relate to Ms. Evangelista,” Pinault’s lawyer, David Aronson, said in opening statements on Thursday. “It is the classic case of someone trying to bootstrap herself to something that is alimony.”

Evangelista is estimated to be worth $8 million but says she is not as in demand as she used to be. She just wants her son to have the same financial support that Pinault’s daughter with Hayek has. The New York Post reported Pinault spends $50,000 a month just on the taxes, upkeep and loan payments for the $12 million Los Angeles home he’s put in a trust for Valentina.

This is a sad situation. Do you think Linda Evangelista is entitled to the money or is $46,000 too much per month?