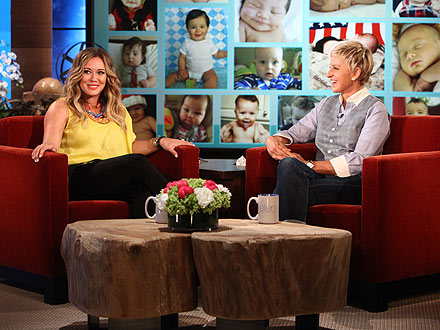 New Mom Hilary Duff has sat down with Ellen on the Ellen DeGeneres Show for her first interview since becoming a mother to son Luca Cruz one month ago.

“I feel weird, because it seems like I’m bragging, but he sleeps from like 11 to six. It is possible, ladies,”Duff tells of Luca’s sleeping habits. “It didn’t happen right away, but the past three weeks, he’s an 11 to 6er.”

Duff reveals she had a relatively painless delivery.

“It was very easy,” she shares. “I went into labor at about one in the morning and I very calmly had my bags packed and woke my husband up after about three hours of walking up and down my hallway. Then I’m like, ‘Okay, it’s time to go, let’s go now.’ We got in the car and drove to the hospital and that was it.”

Duff’s biggest surprise about motherhood is watching the evolution of Luca’s facial expressions.

“Every single day, it seems like there’s a new face that they’re making,” she tells DeGeneres, as a picture of Luca at 3 weeks old flashed on the screen behind her. “He started to smile about a week ago, and that’s the coolest experience. It’s all good.”

“What is to come is such an amazing journey, and a lot of work,” Duff explains to the moms-to-be. “It’s just like the best thing that’s ever happened to you.”

Pregnant Workers Fairness Act: A Step In The Right Direction