Pregnant Workers Fairness Act: A Step In The Right Direction 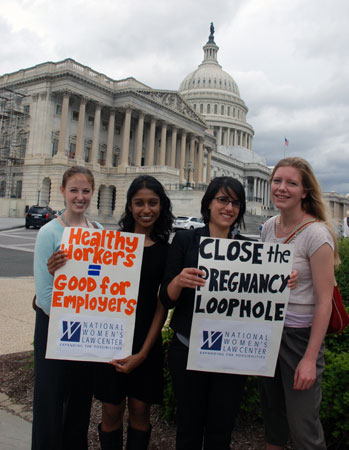 This week congress introduced the Pregnant Workers Fairness Act, a bill set forth to grant pregnant women certain accommodations while pregnant. Though it is not a disability, pregnancy is huge life change, and adjustments must be made for a healthy gestation for mother and baby.

Though pregnancy discrimination was outlawed over 35 years ago, discriminations are still a very common practice. Pregnant women need extra water to stay hydrated, yet a pregnant woman can be fired for carrying a water bottle on the job. She can also be fired for requiring help with physically strenuous aspects of her job or be forced out on unpaid leave.

Women are nearly half of the workforce here in the US and it is becoming more necessary for that second income in many households. Putting a pregnant woman’s job in jeopardy could be financially devastating to a family and the overall economy. This holds true especially for the low-wage and blue-collar women in physically demanding jobs.

The Pregnant Workers Fairness Act seeks to protect pregnant women from common workplace discrimination and to “ensure that pregnant women are not forced out of jobs unnecessarily or denied reasonable modifications that would allow them to continue working.”

The protections under the bill are modeled after the Americans With Disabilities Act, and it is an important bill because though pregnancy discrimination is not legal, it is also not protected under the ADA or civil rights bills.

I cannot say I ever faced being fired or placed on leave for my pregnancies, but I am very lucky to be self-employeed. I have been pregnant twice, and thankfully had very healthy pregnancies. i was placed on bed rest toward the end of my second pregnancy and faced minor complications that limited my abilities to function as a normal person, never mind if I had a physically demanding job. I feel strongly that women should be protected during pregnancy, it is a very special, yet crucial time in a woman’s life and should be respected. It is not a permanent condition, but the effects of financially devastating a family can be.

What are your thoughts on the Pregnant Workers Fairness Act?

Chris Hemsworth Is A Dad!