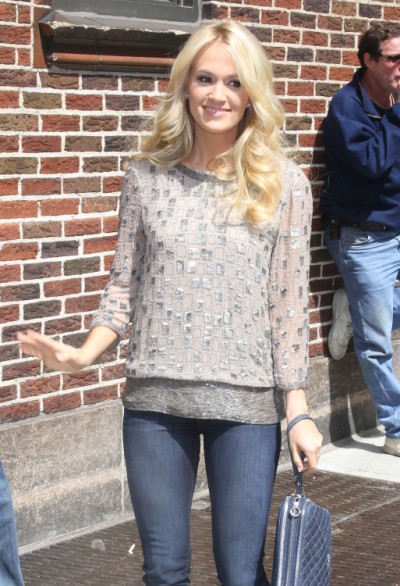 Country singer Carrie Underwood’s music is her baby and she says that’s how it’s going to stay for awhile. Backstage at the American Idol results show last week, Us Weekly caught up with the former champion and asked her about her plans to start a family with hockey star husband of less than two years, Mike Fisher.

“We’re good. I’m super busy and he is super busy. We are still newlyweds,” the 29-year-old explained. “I honestly think that if we brought a kid into it would mess things up right now! We’re good right now!”

But the couple are practicing their parenting skills… on their dogs!.

“He wants to know how ‘my kids’ are doing,” she said. “‘My kids’ are the dogs. He will send me pictures of them on a daily basis and makes sure that I know they are okay.”

Underwood just released her new album, Blown Away, and Fischer’s Nashville Predators are currently losing 1-2 in the Western Conference semifinals against the Phoenix Coyotes.

No rush Carrie, there’s plenty of time to start a family!