Tori Spelling Would Like Baby Number Four To Be A Boy 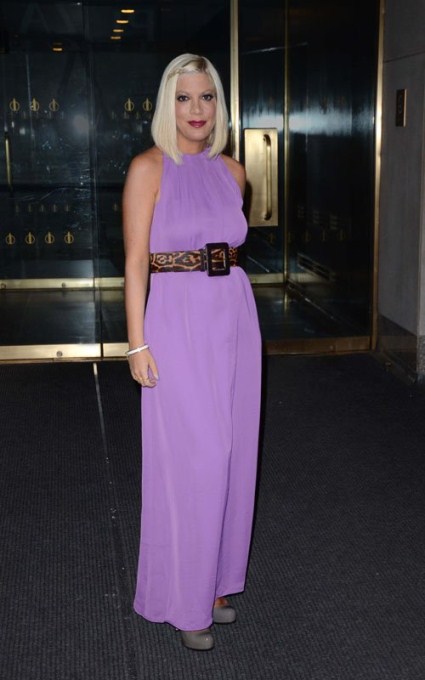 Tori Spelling is hoping she’ll need a blue nursery when she gives birth to her fourth child with husband Dean McDermott in September. The actress tells Rachael Ray on Wednesday’s show “We would like a little boy. And Stella…she’s now a middle child and when we told her about the pregnancy she said ‘I hope it’s a little boy for Liam.’

5 year old Liam McDermott and 3 year old Stella McDermott are not so excited this time around about having another baby brother or sister on the way. Tori says ‘It was as if we had said, ‘Oh we got milk today. We brought home milk today and put it in the fridge and you can go help yourself to a glass.‘ But it’ll be a different story when the new baby arrives.

Tori and Dean have been married six years. It’s marriage number two for both. Their youngest child –  Hattie McDermott – was born in October 2011. Yes – when you do the math that’s only 6 months ago! They weren’t expecting another addition so quickly but are very happy about becoming a family of six. And can’t wait to welcome their new bub to their growing brood.

The former Beverly Hills 90210 star says Dean is feeling rather pleased with himself after she fell pregnant so soon after having baby number three ‘Well, my husband got really lucky that night and then I got lucky. He’s feeling real proud of himself. He’s like a fluffed up chicken. Women walk by and he’s like, ‘Don’t walk too close to me — I’ve got the batter.’

Alicia Silverstone: “People Have Been Feeding Their Kids That Way For Thousands for Of Years.”