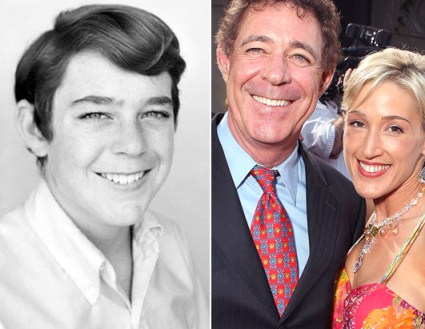 It’s a girl for Barry Williams and his girlfriend Elizabeth Kennedy. Congratulations. Barry – best known for playing Greg Brady on The Brady Bunch – has welcomed his first daughter Samantha Rose. It’s their first child together and his second. He has a nine year old son Brandon Eric from a previous marriage. He doesn’t quite have a ‘bunch’  – but it’s a good start!

Fatherhood this time around comes at the age of 57. While some people are contemplating grandchildren Barry has a few sleepless nights and diaper changes in front of him. There’ll be no slowing down for the guy who will always be affectionately known as the oldest boy in the Brady household.  Barry played Greg from 1969 to 1974. He has revisited his groovy alter ego plenty of times over the years. He’s been in a couple of TV specials and even made a cameo in the 1995 movie based on the popular show. Barry also wrote a book called Growing Up Brady: I Was a Teenage Greg.

Barry and 33 year old Elizabeth’s bundle of joy came early. The baby wasn’t due until April 23. But Mom and bub are reportedly doing well. And Dad is very proud of his daughter.

It’s been a rocky relationship for the pair. Williams filed a restraining order against Elizabeth in 2009 after she allegedly threatened to kill both of them. It happened after she lost a beauty contest. But that’s all in the past and now they’re one happy family…just not quite as big as The Brady Bunch!

Mariska Hargitay: “Adoption Was A Bumpy Ride, But God Was It Worth The Fight!”