Michael J Fox Opens Up About Raising His Kids 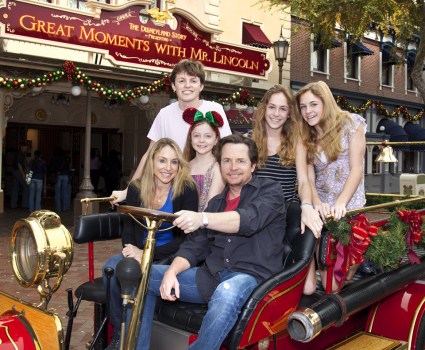 Michael J Fox knows a thing or two about television after starring in two very successful sitcoms – Family Ties and Spin City. He also knows a bit about movies after box office successes like Back To The Future and Doc Hollywood. And the 50 year old also has some experience  as a parent – he has four kids.

That’s right – the guy who first came to our attention as Alex P Keaton on the small screen – has a son and three daughters with wife of 23 years Tracy Pollan. They have Sam Fox who’s 22, twins Aquinnah Fox and Schuyler Fox aged 17 and 10 year old Esme Fox.

Michael has opened up to Parade about life as a Dad. He was adamant to bring up his kids away from la la land  ‘We made a decision really early on, before the Parkinson’s diagnosis, that we’d move back East. We’d just bought a house in Bel Air , but we never moved into it. We had an awakening one day that we don’t want to raise our kids in an environment that’s largely show business and built on whose father had a bigger opening weekend. It seemed fraught with peril’.

So the native Canadian moved across the country ‘New York seemed like a better bet. There’s much more variety in the people that they meet and the relationships they have [in New York]. It’s much more real. They don’t live in a bubble. And I know where my kids are all the time’.

Michael takes great pride in his children. he says they’re not rich kids who’ve had everything given to them on a silver platter “We have a responsibility to make sure that they’re good people, not destructive; that they’re contributors who don’t feel entitled. They’re good kids. I can’t imagine reading about them [in the tabloids].’