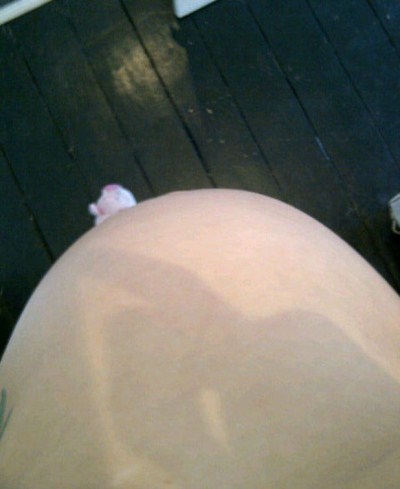 Model and sometime TV presenter, Peaches Geldof posted a pic of her ‘HUGE’ eight month baby bump on Twitter declaring that she “can now officially not see her feet!”.  The 22-year-old announced that she was pregnant earlier this year with fiancé Thomas Cohen’s son who is due April 24th, 2012. Coincidentally, the due date is the same birthday as her late mother, Paula Yates, who died in 2000 from an accidental heroin overdose at the age of 41.

Peaches famous father, Bob Geldof, is thrilled that his daughter is having a boy, here’s what Peaches had to say to Hello Magazine: “Oh my God, he was so happy… The poor man’s been surrounded by women up till now, I knew he would be happy but I didn’t realize how over the moon he would be. He’s always been very supportive of me but he was really overwhelmed and emotional.” Peaches and Thomas plan to name their son, Astala Dylan Willow.

Shockingly, before she has even become a mum, Peaches has been nominated for a “mother of the year” award  for the Foxy Bingo Mum of the Year Awards. She is nominated alongside other celebrities including Amanda Holden, TOWIE’s Chloe Sims, Samantha Cameron, Holly Willoughby and Natalie Cassidy. You would think they would let her become a mom before nominating her, seems kind of dumb to me.

‘Three Times A Charm’ But Ben Affleck Is Exhausted And Overwhelmed

Heidi Klum Keeping It ‘Real’ With Her Children