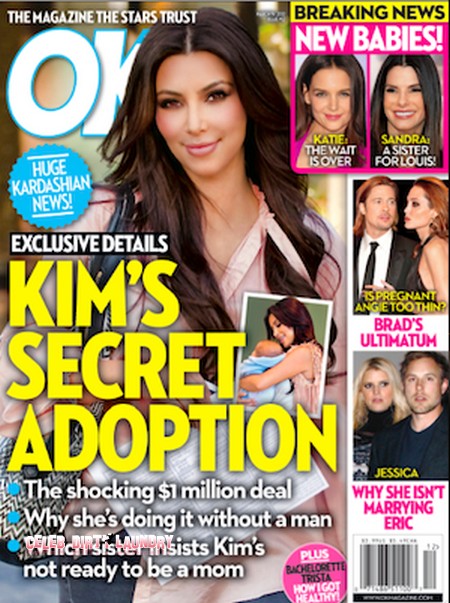 OK! Magazine is all about babies this week.  The magazine claims Kim Kardashian is adopting a baby and they have the secret adoption plans.   Kim who divorced her husband of just 72 days Kris Humphries has always wanted to be a mother.  Kim has not had a lot of luck in the man department so she has decided rather than get a new man she would get a new baby.  Kim has also not been thrilled about all the negative publicity she has received as a result of her failed marriage to Kris and sees a baby and the perfect answer to her problems.

Add to that, seeing sister Kourtney Kardashian pregnant again has just been to much for jealous Kim so now she has decided to do something about it.  Kim thinks adoption will fix her tarnished reputation and is certain adopting a baby will put her back in the spotlight again.

OK! has more: “Today Kim, 31, has begun the process of adopting a baby as a single mother. “Kim has always been very maternal,” an insider says. “Of the three sisters, she’s the one who’s been saying that she’s ready for kids the longest.  “It’s all top secret, but the adoption is already underway,” a source explains. “Kim is ready. She’s made inquiries and gotten information. Now she just has to decide where she wants the baby to come from.”

The magazine as all the details of why she is doing it without a man.   An even bigger shocker one of her sisters does not think she is ready to be a mom yet.  So what do you think, is Kimmie ready to be a mommie?  Sound out in the comments below and let us know what you think.

Confirmed: Jessica Simpson Is Having A Girl!