Rebecca Romijn: Losing The Baby Weight “Was The Hardest Thing I’ve Ever Done In My Life” 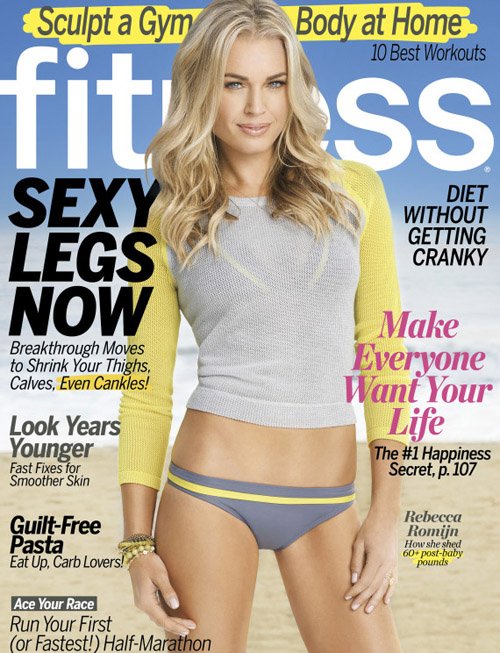 Rebecca Romijn cover the March 2012 Issue Of Fitness Magazine.  In the cover interview, the mother of twins opens up about losing the baby weight and staying dedicated to working out with two small children.

Romijn admits losing the baby weight was the hardest things she has ever had to do.

“Losing that weight was probably the hardest thing I’ve ever done in my life. I had to change the way I worked out, the way I ate — everything. Everything I did before I got pregnant — like Pilates, which I had done for about 14 years — didn’t work anymore. I had to find a completely different way to challenge my body.”

“A friend suggested I try Bikram yoga. At first the idea of doing a 90-minute workout in a 105-degree room sounded like torture. But the sweating is exactly what I became addicted to. My body changed dramatically almost immediately. Within three classes I noticed less belly fat. My knees and legs are stronger than ever now; my arms have definition for the first time in my life; and my posture is much, much better. I also feel completely energized from all of the deep breathing. I leave class relieved of any anxiety I went in with, and the sweating and detoxifying make my skin feel great. I can’t recommend it enough.”

Romijn says she used to feel guilty leaving her children to workout, but now that they are in school it is getting easier.

“That’s been a huge challenge since I became a mom. Mother’s guilt is no joke! I feel it every time I leave them to go exercise. Now that the girls are in preschool, it’s easier. I go as soon as I drop them off at school. As a mom it’s very important to take care of yourself physically and mentally. You’re no good to anyone unless you do. There are days when I rush out to a yoga class just as I’m starting to feel like I might be losing my mind.”

How did you lose the baby weight?