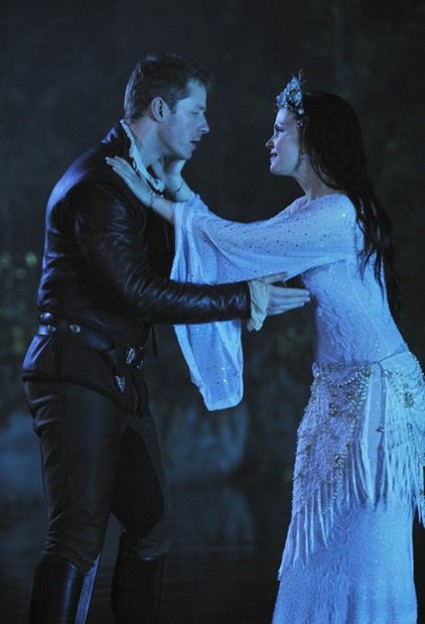 Tonight a whole new episode of ABC’s hit fantasy-drama series Once Upon A Time. Tonight we are at the half-way point of the season and the episode is called ‘Whatever Happened to Frederick.’

On last week’s show the main point of last week’s episode was to up the ante in the power struggle between Gold and Regina. Two significant outcomes – firstly – Gold admits openly to Regina that he KNOWS he is Rumpelstiltskin which entails that he knows EVERYTHING! Also of great significance is that although Gold has more magical power than Regina she has Belle – his true love and greatest regret. If you missed the show you can read our official recap here!   We also got our hands on some pictures of Robert Carlyle who plays Rumpelstiltskin on the set yesterday – you can see the photos here.

Whatever Happened to Frederick official synopsis: With their love for each other growing stronger, David finally agrees to tell Kathryn about his relationship with Mary Margaret and put an end to his loveless marriage. Meanwhile, in the fairytale land that was, while runaway groom Prince Charming searches for Snow White, he agrees to aid Abigail on a dangerous mission to recover something precious that was lost to her.

Our sister site Celeb Dirty Laundry will be live blogging the show with all the up-to-the-minute details at 8PM EST.  OFFICIAL RECAP HERE!  Make sure to refresh often.  While you wait for the recap – check out a sneak peek video of tonight’s episode below!

TMI: Khloe Kardashian Shares Details on How She Is Trying To Get Pregnant