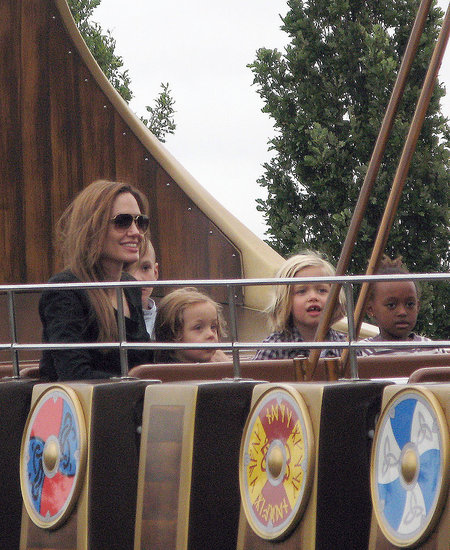 Angelina Jolie and Brad Pitt are reportedly building a theme park at their estate in the South of France for their children.

In September, the couple realized bringing their children to theme parks was unsafe after being forced to cut their day of fun short at Legoland in Windsor, England due to security concerns.

“Brad and Ange felt really bad having to drag the kids home early when they were at Legoland last year. But if their bodyguards said there were too many people then they had no choice,” a source told.

Apparently, plans have already been drafted  for an underground eco-friendly playground at their chateau in the South of France.

“Their eldest son Maddox asked if they could build something similar at the house in France. They were already getting a new pool so they decided it was a great idea.”

The park will be powered by sunlight using roof-top solar panels,  the water will be reused and will feature six of their children’s favorite rides.

“There’s a massive pool, slides, tunnels, boat rides, a pirate island with a castle, a go-kart track and even an old-fashioned carousel.

“Brad has designed a mini train that goes around the whole grounds and it’s going to go through a door at the side of the new structure and into the park.”

Would you build a theme park you children if you were Brad and Angelina?

Jessica Simpson Does Some Retail Therapy Before Giving Birth

Beyonce & Jay-Z’s Daughter Is Ready To Become A Star