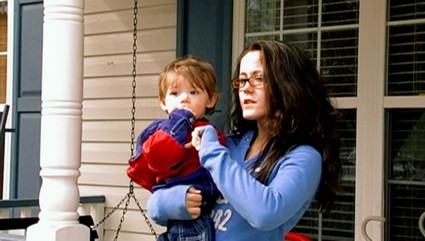 Teen Mom 2‘s Leah Messer, Kailyn Lowry, Chelsea Houska and Jenelle Evans certainly keep the hit MTV show hopping with lots of drama week after week. Good news fans, tonight is a new episode of Teen Mom 2 and on tonight’s episode called ‘Making Moves’ Jenelle stays with a friend after fighting with her mom, and Kieffer is back in the picture; Jo confronts Kailyn about child support; Chelsea and Adam have relationship troubles; Leah remains concerned over Ali’s health.

We will be live blogging the show with all the up-to-the-minute results so make sure to come back at 10PM for our recap.  In the meantime while you are waiting for our recap to start chck out the sneak peek video below of tonight’s episode!

RECAP: Chelsea loves her new apartment and his on a mission to get a job, she heads out to several places picking up applications. At the ‘Year Round Barn’ Chelsea goes for an interview and brings her child along with her. She admits to not having her GED and is left with a promise of a call back.

Kailyn hasn’t talked to Joe since the fight about child support, he is really angry. She meets with some kids from school and asks for advice. She talks more than getting the advice, she tells them that she wants Joe to pay 100% not 50% because he has a job.

Leah is happy that the results came back and her daughter is going to be fine. Corey comes home from work and tells her that he is bored. The twins are so adorable, they are both playing and smiling together.

Janelle gets a lecture from her mom, she thinks she is on a downward spiral. She lashes back out at her mom and tells her that she is under a lot of stress. Janelle has a total melt down and goes to smoke some weed.

Chelsea gets a call from the tanning salon that she applied at, they want to offer her the job.

Leah wished Cory was more motivated to help her and when she gets home there is a letter from the doctor, it says that her daughter, Aleeah, may have skeletal dysplasia, so they want to see her in a year for a follow up. Leah was feeling good that Aleeah is going to be fine, but after the letter she is more confused than ever.

Janelle goes to see her Friend Tori and complains about her mom, she is stressing her out to the max with all the yelling. Tori offers for Janelle to move in with her, it will cost $850.00 per month. Janelle is excited about the idea, but she doesn’t know what her mom is going to think about it.

Chelsea is really excited about the new job and can’t wait to tell Adam. Adam picks a movie for them to watch and when it starts, he is can’t stop looking at his phone which causes another fight.

Kailyn drops Isaac with Jo and he later sits with a friend a complains about Kailyn filing for child support, it is going to take at least half of his pay cheque. His friend tells him that Kailyn’s actions basically tell him that she doesn’t give a f*ck about him.

Chelsea goes to visit her mom and tells her that she got a job, her mom is really excited for her and promises to watch Aubree while she is at work. Her mom is surprised that she doesn’t look that excited and Chelsea explains it is not that, it is Adam that is bringing her down.

Kailyn got a letter from Child Services, Jo has to pay a lot and she has no sympathy for him, she needs the money to support her child. She calls Jo and tries to arrange a meeting to talk, they are going to meet at a local diner.

Jenelle is packing up and it appears that Tori is having more emotions about leaving than she is. Tori fins a love letter and Janelle claims she doesn’t know who it is from, Tori tears it up. Janelle is really glad she moved in with Tori, but she misses Kieffer.

Leah calls the doctor’s office about the letter, they tell her that it was normal  but they didn’t check for all conditions so until she is older, they have to rule things out. Leah is still confused about the letter and goes to talk to Corey about it because it is really making her feel blank. Corey gives her some positive encouragement, he thinks every thing is going to be ok.

Chelsea puts Aubree to bed and shares with her friend that Adam appears to not like her as much as she likes him. Chelsea is wondering if Adam really doesn’t want to be a family or is he just scared.

Janelle is really excited to wake up in her own place, she gets a message from Kieffer and he wants her back. Tori is afraid that if Janelle meets with him, she might screw herself over again. Kieffer arrives at the door and Janelle asks if he missed her, he says yes and asked her for forgiveness. Janelle tells him that they need to take it slow, they both need to get their priorities straight first. Their relationship status is “working things out”. After a few “I love you” back and forth, Kieffer gets a kiss.

Kailyn meets up with Jo at the restaurant and doesn’t start the conversation off well when he calls her a jerk. Kailyn gets right into the child support and Jo tells her it is too much, over half of his pay cheque. Kailyn has all her justification, she doesn’t work and he should support her and Aubree. Jo is frustrated, he finds it so unfair, he tells her that he is going to appeal the decision. Kailyn tries to get into his business and he tells her it is none of her business, she tells him to shut up and he calls her a bitch, all in front of Aubree. Jo tells her he is not going to fight with her in a restaurant, he will fight with her in court.

The Wiggles Welcome Back Greg Page