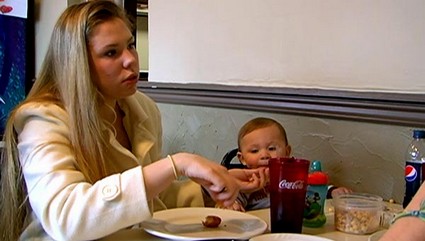 Teen Mom 2 returns tonight with an all new episode called ‘The Beginning of the End.’ On last week’s episode Jenelle stays with a friend after fighting with her mom, and Kieffer is back in the picture.  If you missed the episode you can read our recap here!

On tonight’s show Jo appeals to Kailyn’s request for child support; Jenelle clashes with both Kieffer and Tori; Chelsea struggles with her breakup; Leah isn’t happy when Corey wants to buy a truck instead of moving.

Before the season started we already knew that Leah and Corey’s marriage was over – so I guess it is happening hence the title of tonight’s episode, The Beginning of the End.  Leah is just frustrated that Corey always puts his needs before the family and she has had enough.

We will be live blogging the show with all the up-to-the-minute results so make sure to come back at 10PM for our recap.  In the meantime while you are waiting for our recap to start check out the sneak peek video below of tonight’s episode!

RECAP: Leah is happy with her new job and Cory got work in the mines, they are happy that things are on track. They go check out some property, now they just need a trailer. Leah’s mom, Dean, is surprised that Cory wants to be a coal miner.

Kailyn is really busy with work and school, she hasn’t’ heard of Joe since filing for custody support. She receives a copy of a letter that Joe submitted to the court trying to fight the amount of support he has to pay. I can’t believe what a bitch Kailyn was, she turned around to her little son Isaac and read it to him.

Chelsea is upset that her boyfriend, Adam, broke up with her, Randy tells her to move on. Aubree is an emotional wreck, the breakup is making her feel worse about herself – she doesn’t want anyone else.

Jenelle is heading to Social Services, her mom wants her to pay child support now that she does not live there anymore. Meanwhile, things are not going well with her and Keifer because he is talking to other girls and it’s making her mad. Janelle gives Keifer an ultimatum, he talks to his mother or her, any other girls and it’s done. At Social Services, Janelle is told she has to pay $30.00 a week. Her mother tells her that she should walk away from Keifer, she can do much better.

Kailyn calls Joe asking him why he appealed the child support, she claims she is only doing it for Isaac. Joe tells her to get a better job and she will be able to contribute more. Kailyn asks him if he is getting a lawyer and he tells her she will know soon enough. Jordan, Kailyn’s boyfriend arrives and she tells him what Joe did. She claims she only wants the best for Isaac and she will pay up and get a lawyer if she has to.

Cory sits down with Leah and tells her that he is not sure that he wants to get a trailer because he would rather stay where they are and save more money now that they both will be working.  He goes on to tell her that it would be better if he got a truck than a trailer, Leah is upset that he changed his mind.

Chelsea heads over to her mom’s house and tells her how upset she is, her mother tells her to just get back on the right track, there is someone out there for her.

Jenelle feels like she should be looking for a new job, she is in the car with Keifer and she freaks out when he thinks he is texting a girl. Keifer claims it’s some dude he met on Facebook but Jenelle doesn’t believe him. Janelle is so upset that she starts to speed, she stops the car all of a sudden and Keifer gets out.

Kailyn decides to hire a lawyer who reads a letter that Joe wrote and she doesn’t see any valid grounds for Joe to fight the ruling. She tells Kailyn that this is a tough situation, she needs to be calm at the hearing.

Leah hasn’t really talked to Cory much since he told her that he wants to buy a truck instead of a trailer. She goes to give the girls a bath and the conditions of the bathroom are really poor and not safe for the girls which is part of the reason why she is aggravated about the situation.

Chelsea starts her job, her mom is coming over to pick up Aubrey. She arrives at the tanning salon and Tara is there to greet her, train her and show her around. Chelsea gets her first check-in and a high five.

Corey took the girls to his dad’s for the day, while Leah went to lunch with her parents. She tells them that he wants to buy a truck instead of getting a house. Her mom is surprised he wants a truck because he just got one four months ago. Leah goes on to tell them that she is so surprised that Corey is not on the same page with her. Leah just wants a decent house for her kids, she doesn’t want to go against her husband, but she feels she has no choice. Leah asks her dad for help in finding a trailer.

Jenelle is so upset with Keifer and she feels that she is spiraling out of control. Keifer calls her and asks if he can pick up his shit and she tells him no, he is pissed off, Jenelle just wants to know who he was texting and he finally tells her it was his ex girlfriend. Keifer arrives at the house and shows her the text messages and she’s still not happy. Keifer goes in the other room and ignores her, she comes in and asked for the ex-girlfriend’s phone number and he claims he doesn’t have it. Jenelle tells Keifer that he should care about her and he tells her that he is tired of being treated like a piece of shit. Jenelle has a breakdown, she starts banging doors and crying, Keifer walks out. Personally, I think Jenelle is a spoiled brat! Run Kiefer, run!

Jenelle hasn’t spoken to Keifer and he is heading over. Tori comes into her room and Jenelle starts screaming at her because there have been guys in the house partying all day and Jenelle threatens to move out, here we go again. Jenelle goes around the house to get her clothes and Tori pushes her which causes a physical fight to break out between them, Keifer walks in and tries to stop it but he gets in it with Tori’s boyfriend.

Chelsea is really happy about her first day at work, she goes to pick up Aubrey and tells her mom about the great day she had. On the way home in the car, Chelsea’s dad calls her to see how things went. She gets in it with her dad about Adam again and tells him that she is not happy either way, with Adam or without – but it hurts mostly because he doesn’t care at all.

Leah is going to start looking for trailers with her dad and hopes that Corey will join them. Corey walks in and the two get in an argument over the whole trailer thing and she gets upset that he doesn’t care. Corey tells her that he is tired of making immature decisions and he knows what he wants to do. Leah declares that she is then leaving and getting a trailer, she is not staying there.

Leah Messer Devastated As She Suffers A Miscarriage (Photo)