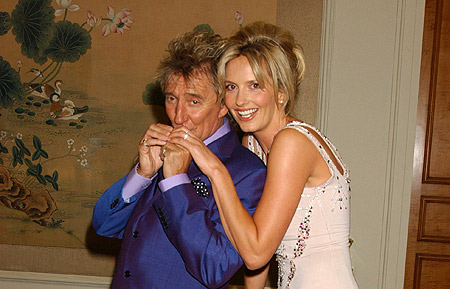 Penny Lancaster admits that having was a second child was not her and husband Rod Stewart’s idea, but that their son Alistair came to them with the proposition. Alistair was supposedly looking for a bit of company and wanted a brother. Lucky for him, he got just what he wanted, Lancaster giving birth to second son Aiden in February of 2011. Lancaster had to undergo in-vitro fertilisation (IVF) treatement in order to conceive, and it was her son’s insistence that brought the whole process across the finish line. Lancaster said on British show ‘Lorraine’:

“Alastair was the one that kept encouraging us to keep trying, saying ‘Please mummy I want a brother’, I was crossing my fingers actually that it wasn’t a girl because he wanted a brother so much. He’s ecstatic and the two of them have the most wonderful relationship.”

“I knew when I met Rod it wasn’t a partnership with just two people, it was a family with everybody. There were times that were difficult at the beginning but with warmth and love and understanding we are now the biggest happiest family. ” said Lancaster about marrying Stewart, who has 6 children from previous marriages(you read that right) for a grand total of 8. Is this the 1700s again?

“Everyone’s invited, the kids come and meet us on trips. Sean came out to Florida to meet us for the New Year, Renee’s going to meet us in Australia on tour and then when we are home in Los Angeles, where we spend most of our time, they all come over for dinners, it’s wonderful.”

The large family is something Stewart is very happy with, and good thing Lancaster seems to be comfortable with the situation as well.

Rod and Alastair Stewart Hit Up The Toy Store

Rod Stewart Keeps Up With His Son