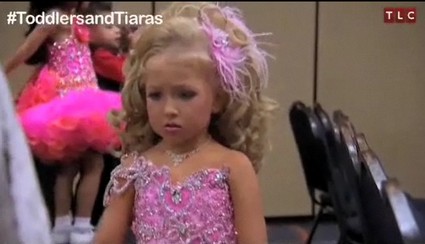 As Mom Marina behaves badly, she does not tell Mia that she did a good job, her husband tells the little girl, good job.  Her poor daughter Mia asks why, ‘Mama is like that.’ ahhh…  Mia keeps asking her mother if she did good, but her mother is mad and does not answer Mia.  Her mother goes on sobbing and ranting, it is really pathetic.   Her mother keeps screaming, they hate her, they hate her as Mia listens.  The poor child!

Official Synopsis: With $10,000 at stake at the Old Hollywood-themed pageant, tempers run high, and conspiracy theories abound. Competitive pageant mom Marina is convinced the pageant director is conspiring against her 5-year-old Mia. Isys, 6, and her irate mom storm out of the pageant, certain that the pageant is rigged. After investing $1200 on a pageant dress, superstar wannabe Saliz, 7, is determined to win Ultimate Grand Supreme.

Check out the sneak peek video below and let us know what you think?  Do you find this as pathetic as I do, ughhh this mother should not be a mother.  It is all about her and not about her child.  Sound out in the comments below!