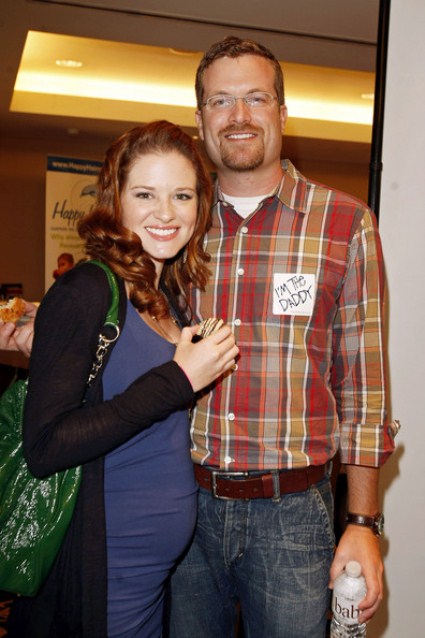 Congratulations to actress Sarah Drew and her husband Peter Lanfer. They are the proud new parents of a baby boy named Micah Emmanuel Lanfer. He was born on Wednesday night in Los Angeles and weighed in at a healthy 7lbs 4 oz.

The 31 year old TV star had no idea she was having a boy. The couple decided they wanted a surprise. Hubby Peter explained a while back why they weren’t finding out the sex of their first born child. ‘I thought it would be a good idea to wait to find out because I am a control freak by nature. I’m about to walk into a chapter of my life where I have no control over anything anymore, and I figured I’d ease myself into it by not allowing myself to plan for the sex of the baby. It’s good training for me!’ That’s one way of preparing for parenthood!

Sarah’s trip to the hospital this week would’ve been like coming home. She’s best known for playing Dr. April Kepner on the popular medical series Grey’s Anatomy. She probably understood everything the doctors said after years of deciphering medical scripts on TV.

Sarah and Peter married in 2002. He’s a lecturer at UCLA. If you don’t watch Greys you probably recognise the redhead’s face from her appearances in a string of TV favorites including Supernatural, Glee, Castle, Private Practice, Mad Men, Cold Case, Law & Order SVU, Everwood and Medium. Now she’s playing a whole new role and we wish the Lanfers all the best as they move into this new chapter.

To co-sleep or not?

David Beckham And His Little Princess