To co-sleep or not? 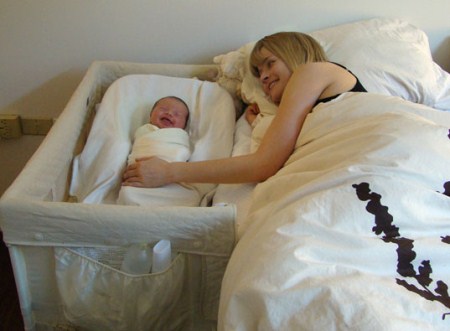 Co-sleeping is a “controversial” topic among mom world (dad world too!) so let me preface this by saying this is merely offering some in site on the process of helping you decide if co-sleeping is or is not right for you. I will not be ‘pro’ one side or the other!

Co-sleeping, for those who aren’t familiar with the term literally means that you share your bed. A lot of families swear by it and other families feel it’s not for them. A lot of new moms share common fears with the concept: “Will I smush the baby?”.. “Will baby fall off the bed?”.. “What will my sex life be like with a child in the bed?”. The other side to that coin is the parents who feel that co-sleeping is a natural transition. Baby spends 9 months in the womb why would baby be soothed by a cold hard crib? Co-sleeping can often make the process of breast feeding much easier with baby right next to you. There is no right or wrong answer, co-sleeping is a case by case choice!

For me personally, I was ‘against’ co-sleeping, feeling the concerns expressed above. For me personally, I needed my space. I didn’t want to have a kid always by my side. I opted for a pack n’ play at the side of my bed for when baby was first born. It was the best personal choice for my situation. If you are in the same category as me there are a few choices you have if you aren’t so thrilled about putting baby into a crib right away at birth. A side car or a co-sleeper are often the best compromise. Baby is in their own bassinet but snuggled flush with your bed. This enables you to be able to be close to your little one and not have to worry about the safety aspects of co-sleeping. A friend of mine took this concept and ran with it as she put a twin bed next to her bed and her children slept on the twin bed next to her. If you go the route of a bassinet (stand alone or side car) you will eventually want to consider when you would be able to transition your child into their own bed and room as most bassinets have a weight limit that typically exceeded by about 4-5 months. You also want to take note that most bassinets are too shallow and can become dangerous when babies can learn to sit up (even if they haven’t reached the weight limits). These are just something to consider. If you are still wanting to co-sleep even after these limits are reached, you can resort to the twin bed option or just letting your little gal snuggle in your bed. I think a common stigma with co-sleeping is that your child will never want to leave your bed. This can be the case, but not always. I have known plenty of kids who work themselves (at their own pace) into a bed or room of their own. Other children have a harder time making that transition. But as parents (whether you agree with co-sleeping or not) need to look at the facts: a bed is a scary place for a kid who has never been in one. Co-sleeping, or just having your children close can often create a sense of calming at bed time. Other kids want that own space from a very early age. Either way, co-sleeping or not, don’t fight it. Let your child lead you into the choice you will make.

I will mention that although I wasn’t for co-sleeping off the bat, swearing it just wasn’t for me… my children will typically end up in my bed by the morning. They don’t understand that night time isn’t scary and it calms them both down to get a better sleep. Even my 6 month old benefits from a little snuggle time with mommy (she sleeps in!). As I said, I’m not for nor against the process and everyone has different reasons and needs for wanting to co-sleep. There are pros and cons to each situation. And as for the sexual relationship, I can promise you that a co-sleeping relationship won’t interfere with that!

Since I never co-slept at a very early age with my kids, I don’t have much advice for you new moms out there. I will say though, I’ve heard of many people talk about how beneficial it is for them and their newborn. There have even been studies that talk about kids are calmer in result of co-sleeping.. whether that’s a “true” case is up to you decide, but some thing to think about anyway. If you are a new mom who is on the fence, talk to friends and family and see what worked for them, just always remember that what works for one might not work for others (to include child to child in YOUR family). If you are concerned about safety go the route of a side car. Remember that whatever choice you make you can always change and go the other direction.

Get Celeb Baby Laundry on your Mobile Device