David Beckham And His Little Princess 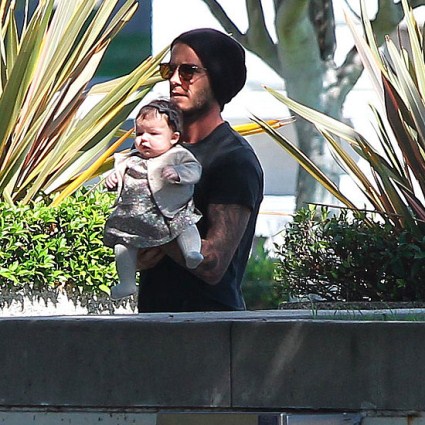 David Beckham is a very proud Dad. He has four children – three boys Brooklyn Beckham, Romeo Beckham and Cruz Beckham…and then there’s his daughter Harper Beckham. Mention her name and a massive smile breaks out across his face. After years of trying for a girl the soccer superstar and wife Victoria Beckham were finally blessed with a daughter last year. Harper’s arrival perfectly completing the happy family of six.

David’s opened up about his little princess during a chat with Google+ ‘I’ve obviously got three amazing boys and with boys you can throw them around and Harper is obviously my first girl and I’m more careful. Still now, I’m changing her diaper and I can’t believe I’ve got a girl. Everything about her is feminine, the way she eats, the way she moves, the way she looks. I love having a girl, but I’m glad she’s got three older brothers and a dad to look after her‘. I think it’s fair to say the English sportsman is completely smitten with Harper.

His little girl can’t walk yet but she’s already somewhat of a fashionista. That’s probably because Mom is a budding fashion designer who has been named one of the best dressed women in the world. David joked about the cost of keeping his six month old daughter in designer threads when talking about his new deal with the LA Galaxy soccer club  ‘Her wardrobe is incredible already. I’m glad I’ve got a two year contract‘.

But at the end of the day the 36 year old is thankful for his family and say they mean more than any soccer trophy or sporting accolade. ‘When you’re married and have children your priorities totally change. We’ve got three amazing boys and a little girl we have to look after and it’s all about them. They come first.’