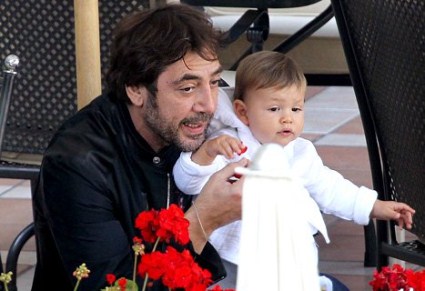 There were plenty of celebrations for Penelope Cruz and Javier Bardem over the weekend. Their little boy – Leo Bardem – turned one. I can’t believe it’s been a year since they welcomed their son into the world.

With parents like Penelope and Javier it’s no wonder the toddler is so adorable. He was born on January 22nd last year in Los Angeles. Mom and Dad managed to keep his name a secret until a family friend let it slip when Leo was a few weeks old. We haven’t seen much of the Bardem baby – he’s been kept out of the spotlight for much of his first 12 months. That’s the way the couple like it – Penelope not wanting to have his picture splashed across the tabloids every pother week ‘I want my son – and my kids if I have more – to grow up in a way that is as anonymous as possible. The fact that his father and I have chosen to do the work that we do doesn’t give anybody the right to invade our privacy’.

His Oscar winning Mom has also made no secret of the fact his arrival turned her world upside down for the better ‘Being a mother changes you immediately. It’s hard to explain because it’s so deep. But it’s the most beautiful feeling I have ever had‘.It also put her career in a new perspective ‘Working as hard as I did is not for me any more. I was exhausted and had nothing to give. You have to live your life to be able to tell other stories. I’m happy I made that decision‘.