Liv Tyler Opens Up About Motherhood 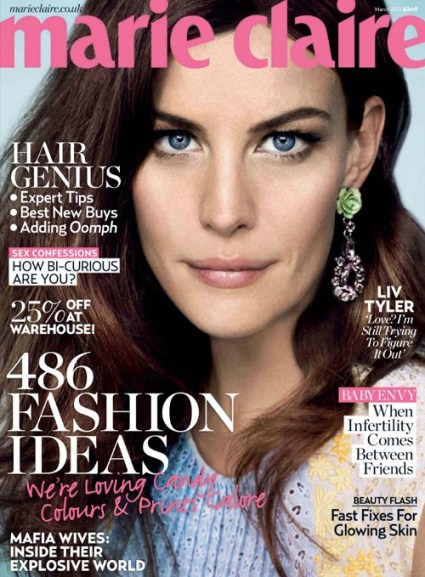 Liv Tyler is the Marie Claire UK covergirl for March 2012. Inside the 34 year old actress opens about being a single Mom and her seven year old son Milo Langdon.

Liv had anything but a conventional upbringing. Her Mom is former Playboy playmate Bebe Buell and her dad is rock singer Steven Tyler. She says  her own experience made her determined to give Milo a more stable childhood. ‘Absolutely. It’s brought up a tremendous amount of issues, concerns and worries for me, being a mother, and how much that meant to be based on my childhood and what I went through. Wonderful, beautiful things and difficult things. It was always a dream of mine to be a mother. I didn’t ever really dream of being an actress. I used to dream of being a singer, but I always dreamed of being a mother ever since I was young girl.’

She moves around a lot in her profession but she recently put down roots in New York City because she thought it would be good for her little boy. ‘I’m always trying to figure out what’s best for him [Milo] as a person. The kind of person I want him to be. The values I want him to have. Much as I love my friends and LA, I want him to have more of an East Coast upbringing. The sense of community. Walking to school four blocks away.’

Liv is a single Mom these days. Her marriage to Milo’s Dad – British musician Royston Langdon – ended in 2008 after five years. She says it’s been a hard thing to get over but she’s moving forward. ‘I feel like I’m learning every day how to get through life and the world. Not just from the divorce. I felt that way throughout my whole life, ever since I was young person. I’ve had a lot of big things happen to me.’

What To Expect When You’re Expecting – The Movie