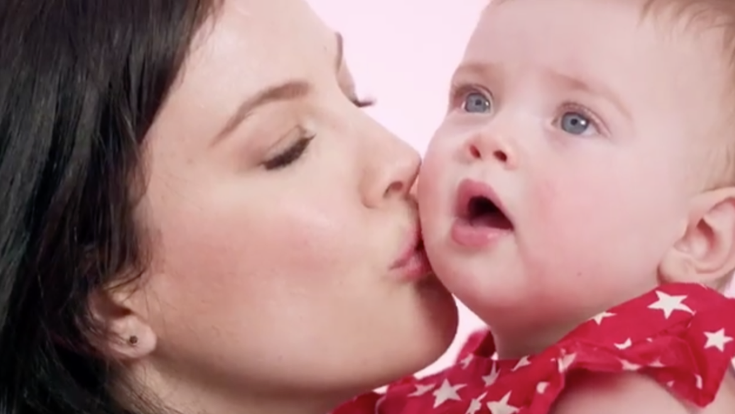 Liv Tyler’s children daughter – Lula Rose, 10 months and son – Sailor, 2 are following in their gorgeous actress mother’s footsteps with an appearance in the newest Gap advertisement campaign. Longtime fans of Liv will remember that before she made a name in movies she was a model in both print ads and commercials. Victoria’s Secret Model Candice Swanepoel’s son – Anacã, 7 months also appears in the shoot.

The adorable children, along with their mothers, enjoy playing with bubbles, balloons and flower petals while modeling the newest Gap Kids and babyGap collections. Not to be outdone, both moms also wear apparel from the Gap. The Lord of the Rings Actress Jurnee Smollet-Bell, model Coco Rocha, and artist/photographer Ali Bird and wife Cass Bird also appear in the ad with their children. Jurnee’s version of the Bellamy Brothers’ Let Your Love Flow sets the tone for the commercial which was co-directed by Liv with Paola Kudacki.

The commercial titled “Mama Said” is part of the the Mama Said campaign, which supports the charity Every Mother Counts. Every Mother Counts is a non-profit organization dedicated to making pregnancy and childbirth safe for every mother. Family is very important to Liv. Her most recent television appearance was alongside her father, Aerosmith rocker Steven Tyler. Liv and her father traced their family roots on the popular TLC show Who Do You Think You Are?

Liv also has a 12-year-old son Milo from her marriage to Royston Langdon. Neither Milo nor the younger children’s father Dave Gardner appears in the ad campaign. Liv and her family currently live in London but she visits the states often for her work. Beyond the Gap campaign, Liv continues to works as a Belstaff brand ambassador and creative contributor for the company which produces high-end fashion items.

What do you think of Liv’s children appearing in this new Gap campaign? Share your thoughts below in the comments section and don’t forget to check back with CBL for all the latest news on Hollywood’s hottest celebrities!