Heidi Klum: “We Don’t Want The Children To Be Part Of This Madness.” 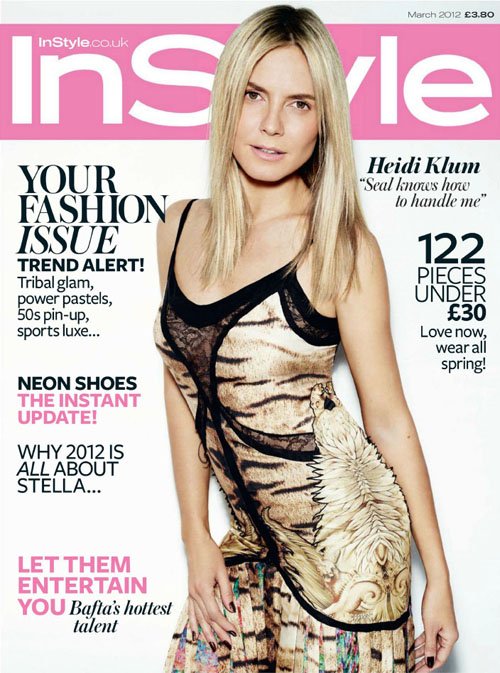 Heidi Klum who just announced her separation from husband Seal covers the March 2012 issue of InStyle UK magazine. In the interview which took place before her separation, Klum opens up about raising a family in the spotlight and creating a brand her children can inherit.

Klum admits she and  have bodyguards present at all times to protect their children from the madness that surrounds them.

“That’s something my husband insists upon; especially when he’s away. He says: ‘If I can’t be there to protect you, I have to have another man who can’. But I do believe if you want to live where the action is, where life moves fast – you have to accept that that’s the way it is. You are a dear in headlights. Sure, I’d rather live in Idaho, but I can’t drive to the studio from there. Seal and I do have a bottom-line and it’s to protect the kids. Our bodyguards are with them today, for example, because we’re both working. We don’t want the children to be part of this madness. It’s bad enough when he and I go anywhere. I don’t want to push or put any of this on them. They’ll find their own way.”

Klum says she has tried to create an empire distinct from herself, so it can be passed on to her children.

“I want to make a brand that can stand alone without me, that I can give to my kids. Every parent wants to pass something along. You worry. Are they going to find the right job? The right person to love, to make them happy? Are they going to get into trouble; drugs, drunk driving? I want to help them – I think about that more and more as I get older. I’m not worried about wrinkles, I just want to give my children a good foundation.

Do you think Klum is smart for trying to ensure she provides a stable future for her children?

Angelina Jolie Is Pregnant, Weighs 98 Pounds, And Is Headed For Rehab?