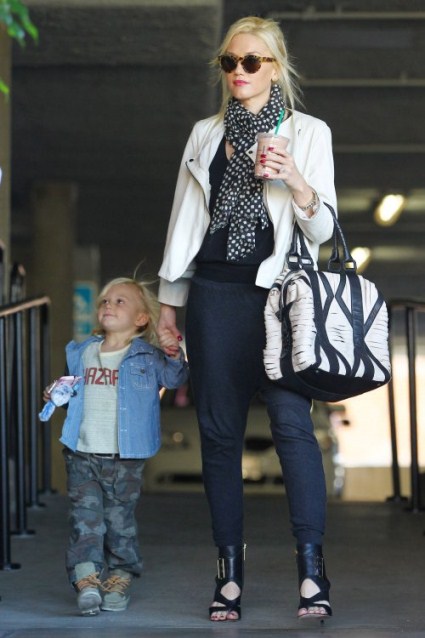 Gwen Stefani and son Zuma Rossdale looked like they’d just stepped out of a fashion catalog when they were spotted in Santa Monica. The singer and designer was out and about in California on Thursday. On her to do list – taking her youngest boy to the doctors.

The Hollaback Girl’s three year old blondie was rocking camouflage pants and a denim shirt.  He looks like a mini surfer with that longer hair.

The No Doubt lead singer looked amazing as usual. Her outfit was navy,white and black. She added a polka dot scarf and some killer heels. The standout was her oversized bag – which was matching of course!!  The ever present platinum blonde hair and a pair of sunglasses  finished the look off.

The pair were both wearing items from one of Gwen’s many fashion lines. She has L.A.M.B and Harajuku Lovers. Recently she added Harajuku Mini to the list. It’s a trendy label for young kids.  She has two models at the ready when she wants to show off her kids designs – Zuma and his older brother Kingston Rossdale.

Gwen has made no secret of the fact she’d love a little girl. Can you imagine the outfits she’d wear? But it doesn’t look like 2012 will be the year the budding fashion designer and husband Gavin Rossdale add to their family. Gwen has a new album with No Doubt and a tour on the drawing board. Gav will be overseas for months at time touring with his old band Bush who recently reformed.