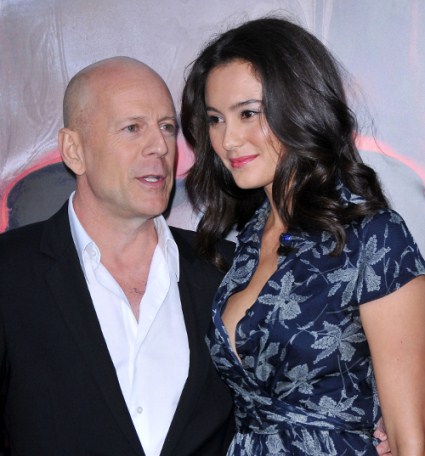 We all know Bruce Willis and Emma Heming are expecting their first baby together – but we now know what they’re having. Get ready to paint the nursery pink – ’cause it’s a girl!

This is Emma’s first child. But hubby Bruce is somewhat of an old hand at fatherhood. He was changing diapers more than two decades ago. He has three daughters with former wife Demi Moore.

Their  little girl will have three very grown up big sisters. Emma is Stepmom to Rumer Willis – who’s 23, Scout Willis aged 20 and Tallulah Willis is 17.  They’ll also come in handy as babysitters when Bruce and Emma need some time out from baby duty.

So is Bruce upset he doesn’t have a son to carry on the name… ‘My daughters really rule my emotions, and I would do anything for them’. Awww. He’s just a big softie at heart despite his tough onscreen image.

Fatherhood could be a bit more of a challenge now. The Hollywood star is 56. The broken sleep might be a little tougher to put up with this time.

The popular actor and former Maxim magazine covergirl – who’s 23 years younger – have been married for two years. He was married to Demi for 13 years. The couple eventually divorced in 2000. They have always remained close though for the sake of their girls. He was even good buddies with her last husband Ashton Kutcher. So I expect Demi wishes nothing but the best for her former husband as he prepares for fatherhood the second time around.

Emma Heming Bumps On Day Out With Bruce Willis