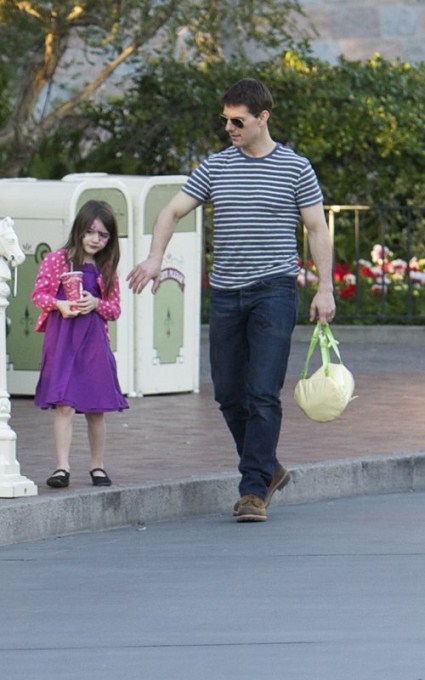 Suri Cruise had her famous Dad Tom Cruise all to herself during a trip to Disneyland this week. The pair spent an afternoon at the ‘happiest place on earth‘ in Anaheim, California. They were just like any Father and Daughter spending some quality time together.

As usual Little Miss Suri was all dressed up for her big day out. She doesn’t do casual! She had a purple dress and a pink polka dot sweater. No heels though, it was flats given the amount of walking you do when visiting the Magic Kingdom. Suri accessorised with a bag but Tom was seen carrying it most of the time. The actor’s little girl has him wrapped around her finger. The finishing touch? Some face painting!

Suri was probably enjoying having her Dad around after his hectic work schedule over the last six months. He was busy shooting Rock of Ages. Then he had to hit the promotional trail for Mission Impossible: Ghost Protocol. The last half of 2011 was work heavy for the popular actor and his beloved family didn’t get to see him as much as they would have liked. But now he can relax …with Rock of Ages not opening in cinemas ’til June. So we can expect to see plenty more day trips like this one.

Katie Holmes let the two most important people in her life enjoy Disneyland on their own. She wasn’t seen during Wednesday’s visit. The actress knows how important it is to allow Suri and Tom some time alone to hang out together.

Blue Ivy’s Godmother Is Most Powerful Woman In World