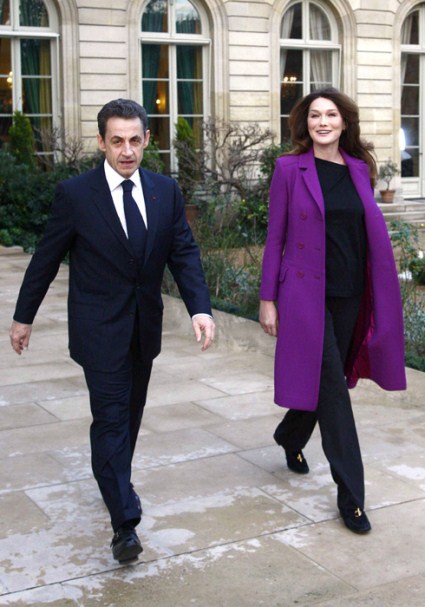 The First Lady of France looks amazing after giving birth just over three months ago. Former Supermodel Carla Bruni-Sarkozy is married to the French President Nicolas Sarkozy and last October they welcomed a baby girl Giulia Sarkozy. But when she stepped out for a recent State Dinner you’d never know she was a new Mom.

Giulia – born October 19, 2011 – is their first daughter together. The couple have four sons between them from previous relationships. Nicolas is also a grandfather. Giulia has a very special claim to fame. She’s the first baby born to a sitting president in modern day France.

Carla hasn’t been seen very much since the birth. There’ve been a couple of functions…but now she’s ready to step out in the spotlight and reclaim her position beside her husband. Last week the stunning 44 year old was the picture of health when she attended a function with the President at the Elysee Palace.

She wowed the crowds with two outfits. First she wore black trousers and a black top with a bright purple jacket and flats. That night she upped the glamor considerably at a State dinner. The Mom of two wore a black mini dress with long sleeves. Her famous hair swept up. There was no mistaking Carla, who looks in great shape despite her daughter being  just over 12 weeks old.

Before becoming the First Lady she was a Supermodel turned folk singer. Now Carla is quite happy to support her husband on the world stage and be Mom to Giulia and ten year old son Aurelien.