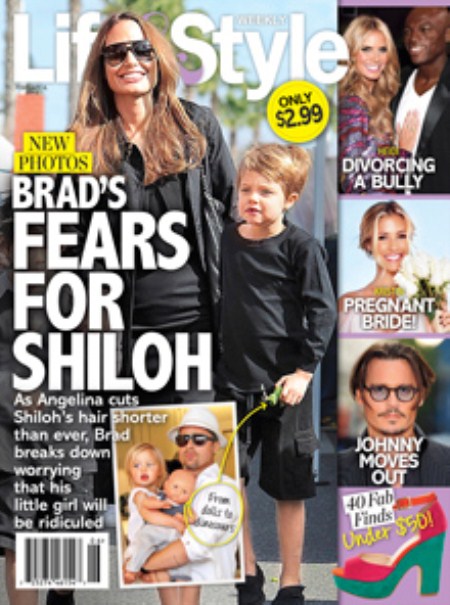 Brad Pitt‘s daughter with Angelina Jolie, Shiloh recently had her hair cut shorter than ever and Life & Style Magazine is claiming that Brad is afraid she will be ridiculed.  Because of Shiloh’s habit of dressing like a boy the press has made cruel and snide remarks so Brad is frightened for Shiloh.

Media outlets have printed their concern that Shiloh’s desire to dress like her brothers will lead to gender identity issues.  This is just the same old news that the tabloids have been printing for the past year.

Angelina came out a year ago and defended Shiloh’s style saying, “I think she (Shiloh) is fascinating, the choices she is making. And I would never be the kind of parent to force somebody to be something they are not. I think that is just bad parenting… Children should be allowed to express themselves in whatever way they wish without anybody judging them because it is an important part of their growth. Society always has something to learn when it comes to the way we judge each other, label each other. We have far to go.”

Shiloh’s just going through a harmless phase, she has two brothers so she wants to be like them.   What do you think?  Sound out in the comments below!