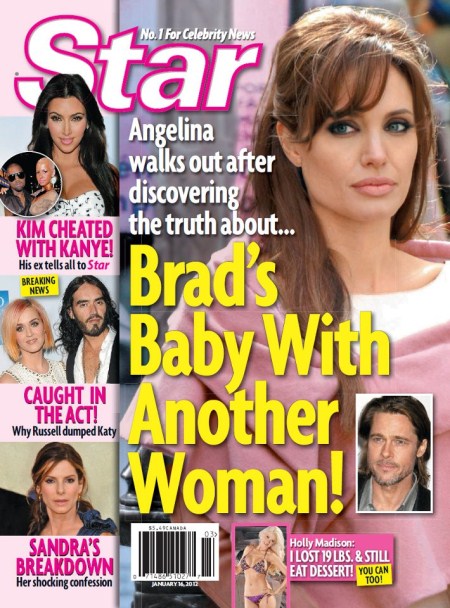 Star magazine claims that Angelina Jolie walked out on Brad Pitt after she found out he had a baby with another gasp… woman.  Wait a second the other woman is suppose to be Jennifer Aniston.  Last time I looked she did not have a baby.

Star Magazine has the scoop: “A fuming Angelina Jolie stormed out after a huge blowup with Brad Pitt when she learned the bombshell news that he had tried to have a baby with another woman — his ex-wife Jennifer Aniston!  The truth came out: Brad and Jen tried to have a baby, but she miscarried. “He had never told Angie this before,” the insider revealed and added that the 36-year-old felt “betrayed.” “She had assumed all along that she was the only woman Brad had ever impregnated. Now Angie is questioning everything, including whether she can ever trust Brad again.” Betrayed and shaken, she walked out and left Brad with the children.”

This story is  a little far fetched don’t you think?  Why would Angelina care? What do you think, does Angelina have a right to be mad at Brad?  Sound out in the comments below and let us know.