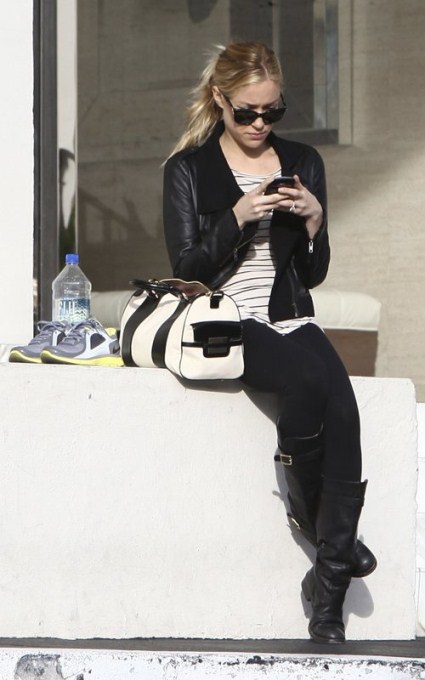 Kristin Cavallari is taking pregnancy in her stride. The gorgeous former star of The Hills and Laguna Beach is still sticking to her usual work outs and fitness regimen. She was spotted leaving her regular gym in Los Angeles yesterday. The only thing that’s changed is the tiny baby bump she’s now sporting!

After a session at the gym first time Mom to be Kristin was snapped waiting for her car outside. She’d obviously managed a quick change before her valet rocked up. Gone was the gym gear – she was wearing a leather jacket, striped top, leggings and combat type boots. She was passing the time texting on her phone. Not the first time we’ve seen the blonde star with cell in hand! Kristin is a regular tweeter and posted her Twitter followers a message after receiving lots of congratulations online when her pregnancy was announced – ‘Thanks for all the sweet messages! We are so excited for this little bun in the oven‘.

The baby daddy Jay Cutler – a Chicago Bears quarterback – also used social media to say thanks and set the record straight about their on again off again relationship ‘Thanks for all the tweets. We couldn’t be more excited. We don’t usually comment on our relationship but for the record I never broke up with Kristin. It’s unfortunate some people are saying hurtful things during such a joyous moment in our life.’ It is a special time and we hope they have sorted out any problems they may have had – and are getting ready to welcome their special arrival in 2012.

Leah Messer Devastated As She Suffers A Miscarriage (Photo)