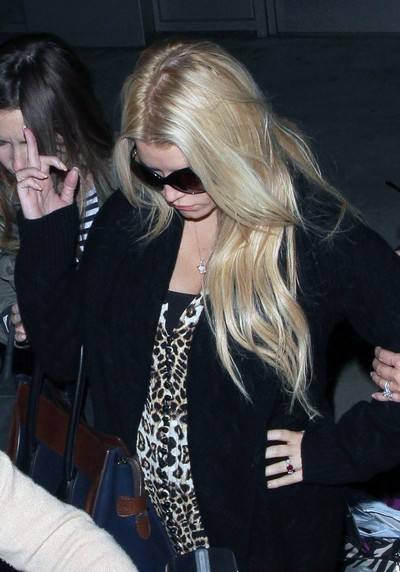 Jessica Simpson gives photographers the middle finger as she arrives at LAX.   Jessica was sporting a loose leopard print dress and her pregnant bump is clear to see.  It has been rumored that she is at least six months pregnant and judging by the size of her bump I would believe it.  This means that Jessica and fiancé Eric Johnson could have their their first child in the new year, 2012.

Apparently Jessica was hoping to secure a large payday from a magazine before going public with the news, but it seems there’s been no takers – at least in her desired price range. Sadly for Jessica a top PR expert explains that she just does not have the ‘star power’ to get the $500,000 payday that she was looking for.

I guess Jessica got upset because she is tired of everyone asking if she is pregnant!  What you do you think is Jessica pregnant?  Sound out in the comments below!

Amy Adams Visits The Pumpkin Patch With Her Daughter