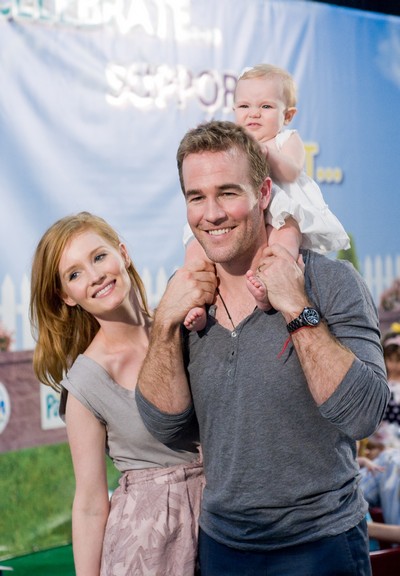 Former Dawson’s Creek’ star James Van Der Beek is going to be a dad again.  James already has a 13-month-old daughter Olivia with his second wife Kimberly Brook – revealed on his twitter page that his spouse is pregnant again.

He wrote: “Just when we thought we couldn’t feel any more blessed, it seems the universe has plans to give our daughter a sibling… #humbled (sic).”

No new yet on when the baby will be born or whether it will be a boy or a girl.James often takes to twitter to gush about fatherhood, recently writing about Olivia on her first birthday last month.

He said: “The cliche about fatherhood that’s the most true: It goes so fast. Happy first birthday, little miss thing. I love you beyond…(sic)”

James and Kimberly started dating in July 2009, one month after he separated from first wife Heather McComb and the couple married in a Kabbalah ceremony in Israel in August 2010 before Olivia was born.

After the ceremony James wrote: “Best day of my life so far.

“The woman I love did me the honor of became my wife today… I look forward to earning her for the rest of my life. (sic)”

Jennifer Aniston: I Am NOT Pregnant, I Just Quit Smoking

You might also likeMore from author
James Van Der Beek