Hilary Duff Is Having A Boy 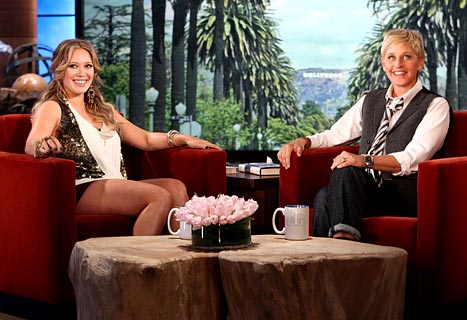 Hilary Duff is having a boy!

Duff revealed the good news that she and husband Mike Comrie are expecting a boy on the Ellen DeGeneres Show.

After Ellen DeGeneres asked the starlet if she knew the sex of the child, Duff responded with, “I do, but I haven’t told anyone yet. I wanted to tell you first.”

DeGeneres tried to guess the sex of the baby with a series of questions, first.

“It’s a boy! Good job. I had feeling it was a boy the whole time,” Duff said.

After many false alarms, Duff said, she and Comrie couldn’t believe it when they found out she was pregnant.

“My husband makes this joke that I think I’m pregnant like 12 times a year,” she told Ellen.

“So when it actually happened … he was in the shower and I just held up the test and I was like, ‘Oh my God.’ And he was like, ‘Ahh!’ He was soaking wet. We were just a mess and started crying. It was really exciting.”

Tune in for the full interview on Monday.