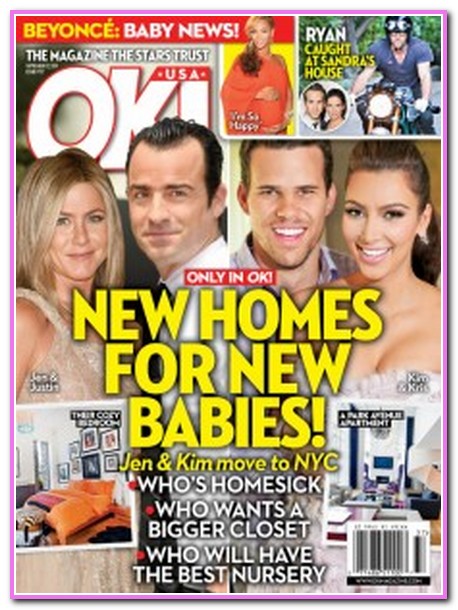 The September 12th issue of OK! Magazine features ‘New Homes for New Babies!, Jen & Kim move to NYC’ Blazoned across the cover ‘Who’s homesick, Who wants a bigger closet, Who Will have the best nursery’ The magazine claims that Jennifer Aniston is moving to NYC to be closer to her current boyfriend Justin Theroux and that they have baby making on their minds.

An insider tells them: “She’s doing it the old-fashioned way. She was on the pill but now she’s been off of it for almost a month and her hormones are back to a place where she can conceive naturally. If she can’t get pregnant within the next year with Justin, then she may consider other methods.”

The magazine claims that not only is Jennifer Aniston making babies, but now that Kim Kardashian just got married baby making is utmost in her mind too.  Another one of their insiders told them: “Kim has babies on the brain.  She wants one immediately.”

So baby bump watch for Jennifer and Kim!

Mel B Trying To Induce Labor