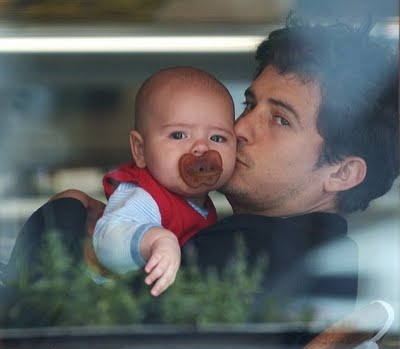 Orlando Bloom was voted most stylish dad in a poll conducted by www.MyCelebrityFashion.co.uk . Bloom is a first time father.  Bloom picked up 71 per cent of the vote with respondents praising the “diversity of his look”. David Beckham closely followed with 66 per cent and singer Peter Andre, received 59 per cent.

The poll was conducted in honor of Father’s day.  The website said,  “With Father’s Day coming in the UK we wanted to put celebrity dads under the fashion spotlight. As a new dad, it was interesting to see Orlando Bloom fly straight into the charts and clinch the top spot as the ‘most stylish celebrity dad.’ The public evidently likes his eclectic style; and even though he beat David Beckham to the top spot, Beckham still managed to stay very near the top of the style charts with his ‘casual’ style.”

The top ten Most Stylish Celebrity Dads of 2011: